The Paradox of South by Southwest 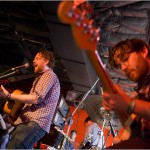 Jon Pareles offers up this assessment of the paradigm twists that underscore a big music showcase/festival like the recent South by Southwest (SXSW) in Austin, TX:

The 24th annual SXSW filled every available space in downtown Austin with musicians clamoring for attention. Where that attention might lead — a live booking, a recording, a license for a song, an advertising tie-in — is less certain than ever in a music business that’s struggling to sell recordings.

But the corporate sponsors that swarm SXSW know that music draws a crowd, one that’s treated as a market for just about anything except, paradoxically, recorded music.

Pareles points out that the line-up for this year’s SXSW was different than previous years, less “underground” and more, well “mainstream” — if you can still call anything in music short of Lady Gaga or Beyonce “mainstream” any more. He mentions appearances by

… hardly your typical “underground” indie-rock fare. I mean, if two of the Dixie Chicks are showcasing at SXSW, what does that tell us about how difficult it is to find an audience these days — let alone “sell” them plastic disks with recordings that are just as easily delivered as a stream of digits and electrons. So Pareles makes this observation:

This year catchiness was king, with few misgivings about being too accessible. Bands weren’t counting on a second glance.

Well, “catchiness” is nice. Hell, I can’t get the Lady Antebellum track “Need You Now” out of my head, but I’ve listened to the entire record via Lala.com and that’s the only track I’d consider listening to again. So catchiness only goes so far.

“Catchiness” might get somebody to listen more than once, but that’s not going to assure the kind of long-term connectedness that will sustain a creative enterprise. That takes more than “catchiness.” That takes “authenticity,” — and, of course, as soon as you’ve figured out how to fake that, the rest is easy…