iPad: T-Minus 48 And Counting – New Uses for a New Gizmo 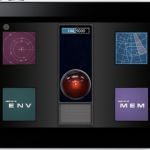 Anybody who knows me knows that I’ve been quite looking forward to the arrival of my Apple iPad when a UPS truck pulls up in front of the house sometime this coming Saturday.

I’ve been really frustrated with most of the pre-arrival analysis — those tech pundocrats who dismiss the new gizmo as “just an over sized iTouch or iPhone.” (In case you’ve missed it, Dave Pogue in the NYTimes does a nice job this morning of critiquing all the reasons why the iPad is/is not an iTouch.)

My own expectation is that this is one case where the new gizmo will eventually prove to be anything but “just another….” something that already exists. No, this is new, and it’s going to change things in ways we can hardly imagine.

Maybe the best example to look back on is the iPod itself. No, not because the iPad is “just a big iPod,” but because of the way the arrival of the iPod heralded the arrival of new ways of doing things. Think “podcasting” – a form of expression that did not exist, nor was hardly imagined, when the iPod was first introduced. 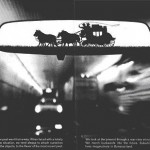 "The past went that-a-way."

When the iPod first showed up, it could easily have been dismissed as “just another MP3 player,” the Diamond Rio with a hard drive, a few thousand tunes in your pocket instead of a a few dozen. Big whoop. But humans too often see the future through a rear-view mirror (“rump-bumping into the future,” McLuhan called it…) and new technologies are always perceived at first as a variation of an existing technology – until new uses are found for the new technologies. Podcasting is a perfect and recent example of how that works. Before the iPod, there was no such thing as podcasting. Now it is entire communications system, a part of operations far and wide, covering an infinite number of topics, and an indispensable way of accessing all kinds of information. I use my podcasts now to listen to everything from American history to music business tips.

I suspect the same thing is going to happen when the iPad shows up. Its resemblance to and roots in existing technologies aside, there is an aspect of this gizmo that is entirely new, and people are going to find new ways of using it that have yet to be imagined.

Well, OK, not entirely yet to be imagined. For example, Jackson Miller of Nashville imagines the iPad as a personal “dashboard” that gives him access to the many facets of his life from a single device: 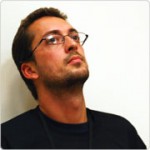 Over the past few weeks something interesting has happened. Most of my daily routine for checking data has moved to my iPhone. Maybe I shouldn’t admit this, but much of it takes place before I even get out of bed in the morning. The main problem with this method is that the screen is a little too small.

If only I could have something like my phone with a bigger screen.

I know exactly what Jackson means. In the past couple of months, the iPhone has also become the center of my media use, too. Particularly since I found the Google Reader app and started “aggregating” all my sources of text-based content into that single interface.

I also have a Kindle, and shortly after I started using it last year I discontinued my subscription to the paper editions of the Wall Street Journal and the Tennessean. I rarely read actual newspapers any more. But the Kindle is a very limited device — you really can’t do anything with but read stuff, and these days, information use is as much about sharing as it is about absorbing. You can’t really do that with the Kindle. So, like Jackson says, the day starts now with the iPhone. But it’s a little confining to start my day with a cup of coffee and staring into a screen the size of an index card. Enter the iPad.

Jackson’s notion of a portable dashboard is promising, and gives me some idea how I’ll be setting up my iPad when it comes out of the box. But perhaps the most intriguing anticipation of “new uses” that I’ve encountered so far comes from Nicholas Negroponte, in a side bar to this month’s iPad feature in WIRED. Instead of a rear-view mirror, Negroponte is looking through the windshield when he observes of tablet devices in general:

The unsung advantage of current ebooks is being able to use them in bed. Paper books have pages that can neither disappear nor reappear. Instead, we have to turn them, which is pretty stupid and not at all easy when you’re lying on your side.

So why tablets? A short answer: one-handedness.

And it’s not just for bed. Would you have ever imagined how many people walk around looking at one hand? Texting is replacing talking, and thumbs are replacing lips. Laptops, meanwhile, are not mobile. They are nomadic. You have to sit down to use one and do battle for a connection. Standing with a laptop is entirely unsatisfactory.

Tablets are therefore the new frontier. They are the new book, the new newspaper, the new magazine, the new TV screen, and potentially the new laptop.

That’s the sort of assessment that can only come from somebody who recognizes new technology when it arrives understands fundamentally that new technologies portend new and unforeseen uses.

So I’m quite looking forward to the arrival of my iPad on Saturday. I fully expect to be greeted my a mortally flawed device, a “first iteration” filled with “can’t wait for the next version” shortcomings. I wonder how many times I will exclaim “well, that’s stupid…” when I encounter some ill-envisioned function (like the absence of Flash).

But what I’m really looking forward to is the discovery of something new, something as yet unimagined, in the way information finds its way into my cerebral cortex. I also think it’s gonna be fun.

So who wants to meet me at Fido and play with The New Gizmo on Saturday?