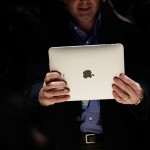 Is it Saturday yet?

I thought Marshall McLuhan had been dead for nearly 30 years, but apparently the geniuses at WIRED have stashed his brain on a shelf somewhere and retrieve his observations about the potential impact of the iPad:

The iPad is the beginning of this end. The thin, single pane of glass that comprises the interface is just a window onto the world, an edgeless frame. Essentially, there is no interface, any more than a person’s fingertips are an interface. The long story of humanism — by which I mean the emergence of individual consciousness as a byproduct of our language and literature — comes to an end when we return, futuristically, to doing everything by hand.

We no longer hear the voices of the past, because we have our fingers in our ears.

I suspect the iPad edition of WIRED will be one of the first apps I add to mine come Saturday. And if there’s a “Mashall McLuhan” app, you can bet I’ll be scoring that one, too.