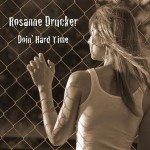 …when the music is really good….

Last week, Rosanne Drucker finished setting up her website using the “SiteBuilder” feature of ReverbNation (which is a plugin-partnership with Bandzoogle). From the site, Rosanne offers streaming audio and downloads of her new “Virtual EP” Doin’ Hard Time.

That was like Thursday. Today (Monday), she’s got her first review of the “virtual release,” in a glowing blog-post by Nelson Gullett, who works as a DJ at WDVX , a listener supported Americana radio station in Knoxville, TN and reports on his musical encounters with his “Fifty Cent Lighter & A Whiskey Buzz” blog. After describing his serendipitous encounter with Rosanne at a club (“…In Nashville… what are the odds?…”), Nelson writes:

The EP contains seven original tracks co-produced by Rosanne and Mike Loudermilk (John D. Loudermilk’s son), and blends several Americana styles to mostly paint pictures of heartbreak and love gone sour. Three of the four songs on the sampler Rosanne gave me dealt with such topics. The title track makes solid use of Bailey and Ickes to tell a heavily bluegrass flavored tale of a heart trapped behind bars, and “This is Sunday” is a piano ballad that counts the days until a lost lover’s return (he’s not coming). Even the optimistically titled and musically upbeat rockabilly bluegrass tune (featuring Rocker) “Mr. Dream Come True” is about a race horse and not an actual Mr. Right. I’m guessing by the “Aww shoot” thrown in at the end of each chorus that the horse doesn’t even finish in the money.

There’s some validation in this review for Rosanne, who has been working on this project for many months and is suddenly getting positive feedback just as it begins to see the light of day.

This review puts Rosanne in some pretty good company. Elsewhere on the page… Ellis Paul, Anne McCue, and somebody named Emmylou-somebody.

We all gotta start somewhere…