The Horns of a Digital Dilemma 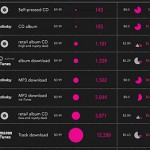 Numbers that not even Lady Gaga can compile

A couple of items that appeared over the past few days clearly illustrate the looming challenge that faces anyone who is trying to forge a life as a performing musician in the rapidly arriving era of “cloud” stored music and digital delivery.

First, the Associated Press compiled this piece that examines the potential of subscriptions services from a “consumer’s” (in quotes because I hate that term when it is applied to digital music) perspective (along with a sidebar comparing three competing services):

There’s no more need to own songs before being able to listen to them at your convenience.

No more buying music to download onto computers and mobile devices — and certainly no more stacking CDs on shelves. Virtually the whole world of recorded music is at your fingertips at any time, for a subscription, over the Internet.

Services that make this scenario possible haven’t proven very popular yet. But new price cuts and advances in technology could finally drive the idea to the mainstream.

Well, gee, now, where have we seen that idea before??? Personally, I find it a tad amusing that the “mainstream media” is finally coming around to what has seemed obvious to me for more than a decade: namely, that all of this technology is leading to a time when all our record collections are remotely stored and delivered on demand through digital channels, mobile and stationary. I guess the idea is finally becoming trendy now that it has been enveloped in easily grasped terminology, i.e. “the cloud” business.

The AP article does a good job of assessing both the upside of a subscription service and some of the reasons why such services have yet to catch on:

Justin Darcy, a 32-year-old sales director at a resort company in San Francisco, says he consumes so much music it would cost him $10,000 a year if he didn’t have a Rhapsody plan. He calls it ”one of the greatest values in consumer goods I’ve ever come across.”

Given the obvious benefit of being able to listen to millions of songs as if they were in your personal stash, why haven’t services like these gotten more use?

Partly because of poor marketing, previously clunky execution and the fact that people are more familiar with compact discs and downloading songs from Apple Inc.’s iTunes music store. People who spend less than $120 a year on music also wouldn’t see the subscription plans as such a great deal.

But the AP article does a rather poor job of exploring the dark underside of this musical Nirvana where $10k of product consumption is suddenly reduced to a $10/mo subscription: namely, what do such economics portend for those who provide the content that the clouds will deliver?

For a frightening hint at the answer into that question, I now direct your attention to the other piece I found over the weekend. Consider this chart, which calculates the actual revenue generated by existing “cloud-based” services. The bottom line appears to be: in order to earn the equivalent of even a minimum wage from Spotify (often cited by music pundits as the best example of a subscription service but still not available in the U.S.), your songs would have to be requested and delivered considerably more than 4-million times every month. I don’t think even Lady Gaga is posting those kinds of numbers.

And, it’s ironic to read one comment (in the Sullivan post) on this chart by Techdirt’s Dennis Yang:

…it’s very interesting to note that in the new, digital era, artists actually make more off of their album sales in iTunes than they did in the old, physical world. And selling albums digitally through cdbaby, without a label, stands to bring in much, much more money for the artist — and frees them from the headache of distributing a physical product.

…which somehow manages to completely miss the point. Yes, artists and bands earn more from their product sales if they skip the conventional channels and go “direct to fan” via iTunes or CDBaby. But when storage and delivery makes its final, ultimate move to “the cloud,” even those economics are going to evaporate. How much artists make from “album sales” is going to become largely irrelevant because there aren’t going to be be any more “album sales.”

Cloud storage eliminates entirely the imperative for listeners (let’s call them that instead of “consumers, OK?), to “own” their own libraries, so all the economics of “distribution” go straight to hell. Yes, it’s a great deal for “consumers.” Who can argue with “whatever you want to hear, whenever you want to hear it, wherever you are”? (Yes, I know there are lots of people who argue with that premise now. They say stupid things like “…I have to OWN my music!” Well, no, you don’t, but don’t get me started…). But that is going to change. And when it does, the “value” in delivering recorded music to listeners is going become something approaching zero, as the chart seems to make pretty damn clear.

Yes the last refuge for “album sales” is going to be at gigs — the “souvenir factor,” somebody has called it. But there is plenty of anecdotal evidence that suggests that even that revenue source is starting to dry up. So how will performing artists sustain their creative enterprise in the era of “cloud” based digital delivery?

As I’m typing, an answer begins to occur to me. I see better now the future-leaning-logic in my distaste for the word “consumer” where music and arts appreciation is concerned. That’s a word that derives from the whole product-manufacturing industrial mentality that has lingered into the 21st Century. It really is time we toss that term onto some ash-heap and burn it.

Consumers buy products. But clearly, as “atoms become bits” the value in “products” is steamrolling toward zero.

Therefore, the sustainable future, I believe, is going to depend on altering the relationship between artists and audience. So long as artists continue to think of their audience as “fans,” those fans will be expected to “consume” their “products.” And once the Celestial Jukebox is fully realized, they are just not going to do that any more.

So stop thinking of your audience as “fans” and start thinking of them as your “patrons.” Pretend we’re back in the Renaissance, and everybody in your audience is a Medici — there to fortify their status in the world by patronizing the arts. Then find tools to empower your “patrons” to build their own circles around their interest in your art. Build relationships, because, clearly, there ain’t much future in building products.

And then get your power tools out and start hand-cranking.