Is This The Solution to Dwindling CD Sales? 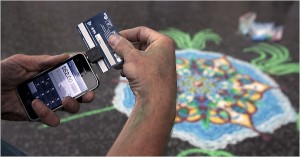 Maybe soon, even "swiping" a card will be old news.

We’ve all heard over and over again that the revenue generated from CD sales has been plunging over the last decade. The music “industry” is decomposing dinosaur, even as music itself flourishes in millions of hearts and venues. But lately I’ve been hearing anecdotal accounts of declining sales from that final refuge where CD sales actually still make sense — at touring artists’ gigs, where the physical product still has some “souvenir” value.

But in the past few weeks I’ve also been reading about devices that convert your cell phone (most typically the iPhone, y’all get with the program now…) into a credit card swiper. The most commonly referenced gizmo is the Square, shown in the photo that accompanies this post.

This morning I’m reading more about the growing popularity of these highly mobile transaction processors:

Light wallets are not a problem for Joe Mangrum, a sidewalk sand painter in New York, who has been using Square to take donations from passers-by and sell copies of his book. Sales have increased sharply since he started accepting credit cards on his iPhone, he said. “I’ve made the sale as opposed to twiddling my thumbs because they don’t have the cash.”

The new services could have the biggest impact on the smallest businesses, like farm stands or house cleaners, that accept only cash and checks because they do not have stores to house credit card terminals and do not want to enter into complicated, long-term relationships with credit card companies.

“…farm stands or house cleaners…”? How ’bout we add to that list “itinerant troubadours” who rely on the sale of CDs and other merchandise at their shows to support their chosen livelihood?

But wait, here’s an even better scenario:

Brian Kusler, 40, a software engineer, is already helping dollar bills join Susan B. Anthony coins as collector’s items. After he polished off grilled lamb and zinfandel at a San Francisco restaurant recently, his dining companion paid the bill and asked him for his share. Instead of hunting down an A.T.M., the two bumped their iPhones together, and Mr. Kusler wirelessly transferred his part of the bill, about $100.

I’ve got “Bump” on my iPhone and have to say it’s a pretty slick approach to exchanging information. So let’s ramp the concept up a notch:

Another issue I’m hearing from my traveling troubadour friends is how difficult it is to just carry enough inventory on their travels – especially when they take their show overseas. Download cards offer a partial solution but still require some kind of monetary exchange to complete the transaction.

So this is what the world needs now: Let’s call it “iTroubadour” — the artist bumps his iPhone with a fan’s, the dollars are instantly transferred into the artists’ account… and a download is initiated on the fan’s unit that transfers the purchased music to his smart phone.

And then we can all stand around after the show and watch the artists and fans punching each other. Cool beans, huh?

I hope I haven’t just given away a million dollar idea. I mean, if it’s occurred to me, surely it’s also occurred to somebody who can actually DO something about it.

Hello, Bump people, are you listening? I want that app yesterday.