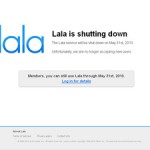 As much as I loved using Lala.com since first learning of it about a year and half ago, I never had a sense of its actual popularity. It’s nowhere near as ubiquitous as iTunes; I sorta figured it was just me and about a half dozen friends who were using it. Which is why when I did tell somebody about it I would invariably finish the dissertation by telling them that “I just changed your life…” (Did I mention that modesty is one of my strong suits?)

Now, with the news that Lala’s new owner – some Silicon Valley upstart called “Apple” or some such fruit — will be shutting the site down at the end of the month, comes this post-mortem from NPR that starts right out by calling Lala a “popular music site that allows users to download or stream their favorite songs…”

But downloading or streaming my favorite songs is just a small facet of what Lala offered. This NPR report does an excellent job of describing just what a paradigm shift this ‘cloud based,’ listen-one-time-free service represents. It’s not just about listening to your favorite songs, it’s about finding NEW favorites. And then populating an accessible library of new favorites with ten times as many selections as previous models permit because the cost is one-tenth of those services.

“I don’t think we’ve seen the last of Lala,” Kantor says. “I don’t know exactly what Apple is intending to do, but there’s no doubt about the fact that streaming music is the way of the future. I think eventually MP3s are going to be the same thing eight-tracks were.”

Are you listening, Mr. Apple?