So You Wanna Be a “Musician” ?

Bob Lefsetz is one of the more controversial pundits in the musical blogosphere. I honestly don’t know what his personal history is. Former label executive maybe? Doesn’t matter. In the past couple of years he’s achieved great notoriety for his prolific “Lefsetz Letter” blog posts in which he beats the dinosaurs further to death with one hand while shedding light on what the new species need to survive with the other hand. It’s quite a balancing act. Some readers think he’s insightful, some think he’s a “blow-hard.”

And I figure “if you’re not pissing somebody off, you’re just not trying hard enough.”

To give you some idea of the Lefsetz effect, consider this shot of the “text in your questions” screen behind one of the panels at this week’s Country Music Summit in Nashville: 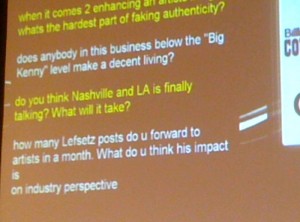 There weren’t any other music bloggers whose name came up during the entire two week conference.

All that by way of introduction to a recent Lefsetz post called The Long Haul that has been making the rounds of the Inter-tubes and offers some fundamentals on how musicians can prosper amid the new paradigms. Bob doesn’t like it too much when other sites lift his material, and I can’t say as I blame him on that score. I want people to follow the link and read the whole thing from Bob’s own site. As an enticement I’ll take the risk of Bob’s wrath of posting these three excerpts:

5. You must work live. It’s the best way to connect with people. You’ve got to be so good, you close the audience. Performing is a different skill than playing in a studio. Start honing your chops now. Play anywhere and everywhere you can. Not focused on the money, but the development of stage skills.

14. Be available on every social networking platform. Of course, Facebook, but a new act could make headway using Foursquare. Hell, have your fans come meet you at Starbucks!

17. Release dates are irrelevant. You’re in constant marketing mode. But the best marketing is a great track, that will be spread far and wide.

The first one should be pretty obvious to anybody who wants to play pick or sing. The others are more pertinent to the current environment. Read the whole post. And while you’re at it, read the posts that follow, Personality Counts and Be So Good They Can’t Ignore You.

And don’t give up your day job.