Disruption Is A Feature, Not A Bug

So it’s gratifying when somebody with more authority than I can muster echoes a similar sentiment, as culture commentator John Naughton at the U.K.’s Guardian Observer last week in his essay “The Internet: Everything you need to know.”

Mr. Naughton attempts to gauge the long-term impact of the Internet — from very early in its tenure – by invoking a “thought experiment” to assess the impact of “Herr Gutenberg’s invention” from a similar vantage point, i.e. just a few years after its arrival:

On a scale of one to five, where one indicates “Not at all likely” and five indicates “Very likely”, how likely do you think it is that Herr Gutenberg’s invention will:

(a) Undermine the authority of the Catholic church?

(b) Power the Reformation?

His point is that there is no way that anybody could have known a few years after the printing press was introduced the full magnitude of the cultural, economic, and political disruption that crude-in-retrospect device would have on the medieval world.

I contend that the Internet brings us to the threshold of a similar disruption — and that, as disruptive as it has been already, we are still in the early stages of of the process.

That said, it is probably useful to remember that things do move a tad faster these days than they did in the 15th century, but some 15-years+ since the popular adoption of the ‘Net and the Web, I think we’re just now beginning to see the cultural, economic, and political implications of all this new technology.

And the evidence, I suspect, can be seen in the advent of that cultural, economic, and political phenomenon known as “The Tea Party.”

As I watched and read various accounts of the Tea Party over the past year or so, I began to formulate the (fundamentally McLuhanist) notion that what we are observing is a direct result of the massive disruption of new media on the popular psychic landscape.

On some visceral level, the fundamental foundations of our perception of the world is changing because the way we perceive the world is itself changing. When not only the world, but the way you perceive the world, begins to change, its no wonder that people would cling with futility to the world as they once perceived it. Hence the Tea Party’s invective to “take the country back.” They want to take it back, alright. Back to the 1950s. Or the 1850s… 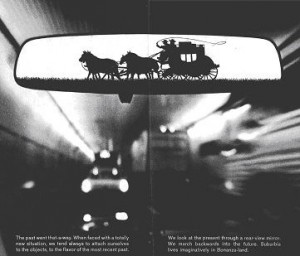 And that point was also echoed for me, for example in this post from a reader of Andrew Sullivan’s blog at the end of April that I’ve been sitting on for two months now:

We’re at a weird point in history, and the Tea Party is a symptom of it. We are in a point in history when institutions that appeared solid are dissolving. The internet has thrashed the old information asymmetry, the monopoly on data that institutions used to have back when the boomers were young and new models aren’t appearing fast enough. And of the models that do arise, not one is going to dominate. It’ll be, for good or bad, a world of choice.

“Information asymmetry”? Right. In other words: all the technologies that started with Gutenberg – from the press to radio to television – have concentrated increasing authority in a decreasing number of sources. And the audiences have grown exponentially in the process. As McLuhan said, “the printing press created ‘the public,’ electric media created ‘the mass audience’ — and now the Internet is reversing that trend. Instead of “information asymmetry we have “parity between the points of origin and the points of reception.”

Naughton’s essay enumerates “The Nine Things You Need to Know About The Internet.”

“Parity” or “Symmetry” — and the disruption that engenders in trends that have been in place for over 500 years — is not on Naugton’s list. It should be Number 1.

Naughton is on the right track when he reflects that the Reformation — and the bloody upheaval it has caused for countless centuries — is a direct consequence of the advent of a new technology. The printing press made it possible for anybody alive at the time to encounter “the word of God” first hand, without the intervention of an elitist clergy and the corrupt hierarchy that supported it.

Now we have another new technology asserting itself around the globe. And with movements like the “Tea Party” we are just beginning to get some sense of the root-level disruption that technology is causing.

We can only hope the next Reformation is not as bloody and protracted as the first. But, then, we are talking about humans here, and some of them do insist on taking their guns into bars…