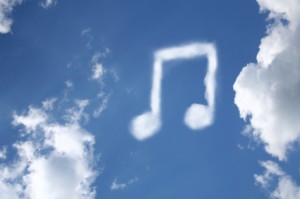 What's That I Hear?

Sometimes, when I write about storing music “in the cloud” and disavow any need for “physical” products, like album covers, liner notes (all of which can be found on the web) or any imperative to show off bookshelves lined with a “record collection,” (I still have all my LPs. They’re in the basement if you want to come over and see them…), I wonder if I’m like a total outlier on the topic. I wonder if I’m the only one who is mostly concerned with listening to music, as opposed to all the ancillary accoutrement that others say they need in order to enjoy audio entertainment. You know, the ones who insist “I have to have something I can touch,” when the real essence of the art is in fact what you hear. Oh, never mind…

Relief from that solitary preoccupation comes today in the form of a report from the market research consortium NPD Group that says that a substantial portion – at least 25% – of iTunes users would shell out some sheckels for a cloud-based subscription service. The report is another one of those pricey research reports, but you can get the gist of it from this press release:

Between seven million and eight million iTunes users in the U.S. would have strong interest in one of the paid subscription options, according to the report. These consumers indicated a willingness to pay a minimum monthly fee of $10 — either for streaming music or access to their personal music libraries on multiple devices. NPD estimates that there are 50 million iTunes users in the U.S. According to NPD’s music industry research, a model that offers iTunes users free access to their own music libraries would attract in the range of 13 to 15 million subscribers.

Gee, only “13 to 15 million subscribers”? The proprietors of Rhapsody (and Napster, and eMusic, etc.) must be looking at those numbers and wondering “WTF do we have to do attract that business?” Answer? You have to be Apple.

But my hunch is that once a company like Apple – a company that seems to have a knack for looking at a proposition from multiple angles, figuring out how to solve multiple problems, and assemble it all into a package that creates a new market – delivers their solution, that “13-to-15 million” is going to get MUCH larger.

If Apple (or any company, I don’t care who puts it all together) can come up with a service that offers the “discover” function of Pandora with the “cloud storage” capability of Lala, the “streaming delivery” capability of Rdio, and the collection and “management” functions of iTunes, if all that can be delivered in a package as intuitive and easy to use as iTunes presently is, then a LOT more people are going to look at that proposition and say, “Duh! $10/mo for all the music I can possibly listen to? Where do I sign up?”

It wasn’t that long ago that the whole idea of even downloading music and listening to it from a hard-drive was a totally foreign and unimaginable concept. Now millions of people do it regularly, like it’s as natural a thing to do as switching on a stereo or dropping a needle.