You Don’t Have To Be A Medici

This one’s been flying around the ‘tubes this weekend, has come up in a couple of conversations, now I want to make sure everybody in my Vast Readership sees it.

When I started the “Celestial Jukebox” blog last year, I started it with an essay that postulated that we’re on the threshold of “Music 3.0” – the third epoch of music as a cultural force in human evolution. I defined “Music 1.0” as everything prior to the advent of recorded music: if you wanted to hear music, there had to be somebody in the room to make it for you, or you made it yourself. “Music 2.0” is the era that began with Edison’s first recording (“Mary Had a Little Lamb”); by the end of the 20th Century, music was marketed and distributed as a product, like soap. “Music 3.0” began when Shawn Fanning unleashed Napster, which marks the separation of music (and most forms of IP content) from the products on which it was distributed. 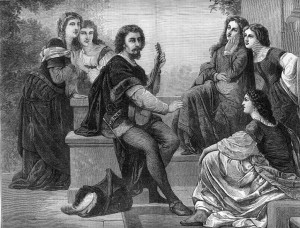 On some level, I’ve believed since I wrote that first essay that “Music 3.o” would herald a return to the “oral traditions” of the first era; that music would become again much more of a “conversation” than a “performance,” that it would something to be shared rather than something to be consumed. Much of the experience of the past few years has underscored that idea, as artists have had to more actively engage their audience and the value of their recorded “products” has diminished.

There is another important aspect of that “return to an earlier model.” That’s the concept of patronage, which is so beautifully articulated in this video of Amanda Palmer (aka “Amanda Fucking Palmer“) from a talk she gave at Harvard recently. Watch the whole thing. It’s only like seven minutes:

The concept of patronage is as old as art itself. In the Renaissance, support for artists of all kinds – painters, sculptors, musicians – was a source of pride for the noble aristocracies.

But nowadays, you don’t have to be a Mozart to have a patron, and you don’t have to be a Medici to be one. As Amanda points out in this talk, anybody whose life is enriched by art can learn that their relationship with that art – and the artist who produces it – takes on a new meaning when the expression of that support is direct, and not through corporate intermediaries.

The patronage model is just now finding its wings in the new era. When an “indie” recording artist — and traveling troubadour — like Ellis Paul can raise $100,000 for a project by appealing directly to his fans, they all become patrons in the new model, at whatever level they can afford.

In her talk, Amanda talks about the medium of exchange between artist and patron, which is of course… money. But buried between the lines of the exchange that she describes there might be another cultural shift emerging. Through patronage, we experience a subtle change in our perception of money itself.

In the old paradigm, “money” is the way that we acquire and consume things. In a new paradigm, perhaps, money becomes the way we express our appreciation of things and volunteer our support of those things that enrich our lives. It’s not “here is your money, now I will take this….” It’s “hear is some money, now share this with the next person…”

I just started to think about that as I watched Amada’s presentation, so I guess I’ll have to ruminate on it some more, but for now at least, that seems like an even bigger idea than “patronage.”