The Lessons of John Philip Sousa 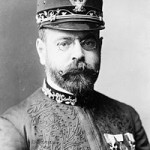 John Philip Sousa, A Century Ahead of His Time

I have been surmising since I started this business, this blog (and the one that went before it) that one major theme of the New Paradigm is the end of art-as-product and a return to the prior era’s emphasis on art as something we all do for ourselves. In the prior era, for example, music did not exist unless there was somebody in the room – often yourself – to play it for you. Then along came Edison, and music became a product like everything else in the industrial era.

In the TED video that follows, commie-radicale pointy-headed East-coast liberal attorney Lawrence Lessig cites the example of John Philip Sousa — he of Stars and Stripes Forever fame (click the link, play the song…) — lamenting more than 100 years ago that the advent of “talking machines” would “ruin the artistic development of music in this country…”

OK, I think we can safely say now that Sousa may have been overstating the case just slightly. Poor guy never did get to hear The Beatles, or Pink Floyd, or for that matter the Academy of St. Martins in the Field – recorded or otherwise. On the upside, he never got to hear Katy Perry, either.

But he was on to something, i.e. the notion that rendering music as a deliverable product would alter our relationship with a fundamental means of expression. Now, as Lessig conveys here, the pendulum is shifting back in ways that only digital technologies can make possible:

With his unbridled support of “User Generated Content” Lessig is going well beyond anything I personally advocate — I don’t favor “mashups” and “re-mixes” so much as learning and all the argumentative and demolished scales and playing them on your own guitar — but the point remains: the New Era, what I call Music 3.0, is very much a return to the “do it yourself” motif of the first era.

Only now, as Lessig points out, anybody with a $1,500 MacBook can put their content out for all the world to see.