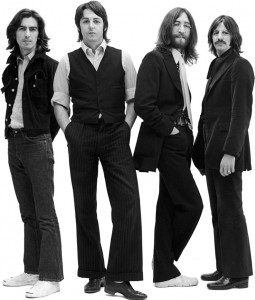 The irony — well, the first irony, really, of several — is that I have had The Beatles on my iPods (and thus in iTunes on my computers) for… oh, I dunno, how long has the iPod/iTunes complex been around? Ten years now?

I’m not shy about confessing how those tunes got there: back in 2001, in the last days of the original Napster, I snagged MP3 copies of the entire Beatles catalog and reassembed it, album by album and song by song, on a hard drive. At the time I suspect I rationalized my acquisition with the knowledge that I already owned the entire collection in its original format: on vinyl LPs that I had purchased when they were first released — like 40+ years ago. I guess I figured that having the collection in a now-obsolete format was just the penalty I had to endure for having been an early adopter, and that there was no harm in “format shifting” by means of new technology.

The other irony is that just a week ago, I actually PURCHASED — and for many actual dollars — the same catalog that I already owned both analog and digital. I finally broke down and purchased “The Beatles Remastered” 16-disc box set, which has been available for over a year now.

I decided to get the set after I had occasion to listen to “Help” from beginning to end for the first time in many years. Mostly, I’ve been listening to Beatles songs when they roll around one-at-a-time when my iPod is in shuffle mode. To listen to one whole LP from beginning to end was something of a revelation, and for that reason I decided it was time to invest in the box set.

After listening to the first half of the collection over this past weekend, I’m glad I did. All the new mixes are stunning -it really was like “hearing them again for the first time.” And music merchants take note: all the stuff in the box — booklets, videos, DVDs, etc. make the package well worth its price.

Which brings us to the next irony of this Beatles-on-iTunes business: I paid about $180 for The Beatles Remastered box set just last week; when I went back to Amazon just now to find the link for the set I had just purchased, lo and behold, the price is now $129. Maybe that’s the other good news of the Beatles on iTunes – the CDs have become that much more affordable. (I just checked, the “Box Set” sells on iTunes for $129, so Amazon is matching that price with…. an actual box set. No brainer there, buy the real deal.)

As usual when news of this development started to break last night, Apple (the computer company, not the Beatles’ label) was very obtuse about the news until the actual announcement this morning. In the ensuing vacuum, the blogosphere expanded with ever more speculation that Apple was finally going to announce their plan for “iTunes in the Cloud.”

That announcement is still coming. And there are plenty of reasons why Apple is sandbagging the prospect, as Casey Rae-Hunter aptly points out in this post about the Beatles news:

If anyone can flip the script, it’s Apple. I’ve said it before, and I’ll say it again: before the iPod, there were several MP3 players on the market. It took an oh-so-sexy scroll wheel (and a savvy marketing campaign) to make the lightbulb turn on in people’s heads.

Some of us pundits think Apple is about to unveil an entirely new framework for iTunes. The company has been quietly building server farms for… something, and it seems logical that, having previously acquired streaming music service Lala, Apple has set its sights on colonizing the cloud.

There’s reason to be skeptical. Why would Apple scrap a sales model that has given rise to the world’s dominant music shop? There’s no doubt that a streaming subscription iTunes would render Spotify DOA if and when it makes it to these shores. But the 99-cent model makes more money, and the labels aren’t exactly trusting of Jobs’ agenda ever since he broke the album format and turned music into the digital equivalent of penny candy.

What Casey is saying is something I’ve been thinking all year – that Apple is going to milk every last dime it can from the “own it for 99c” model before it “flips the switch” on “iTunes in the cloud.”

And that, I suspect, bring us to the final irony of “The Beatles on iTunes.” This is the dying gasp of a once innovative but now obsolete model — and, indeed, the last gasp of the whole “music as product” paradigm” that has dominated the industry since the days of the Victor Talking Machines.

Apple will briefly benefit from being the only source where Beatles stuff can be purchased for digital delivery online. And for a while, maybe until the end of the year, that may prove a profitable if not exactly lucrative enterprise.

But once that cash cow has been milked, the 99c model will be toast, and iTunes will have no reason left for not moving its service into the cloud.