From the spring of 2003 until the early 2009, I researched and wrote a biography of a man named Thomas Townsend Brown, a 20th century scientist and inventor whose life is shrouded in all manner of mysteries. During the course of that research I also encountered the story of a man named Eldridge Reeves Johnson, aboard whose yacht the Caroline Brown served as a radio operator on a deep-sea research expedition in the 1930s.

What I learned in the course of that research is that that Eldridge Reeves Johnson could rightly be regarded as the man who created the modern recording industry.

Last week when somebody asked if I could identify “the grandfather of the recording industry,” I offered the name of Eldridge Reeves Johnson. The correct answer to this particular quiz was not Johnson, but a contemporary of Johnson’s named Emile Berliner. That is also a good answer, as readers will learn presently. But first, let me introduce you to the man who founded the Victor Talking Machines Company — and built that venerable firm into what might rightly be regarded as the first “media conglomerate” of the early 20th century.

Except from Chapter 30: The Caroline 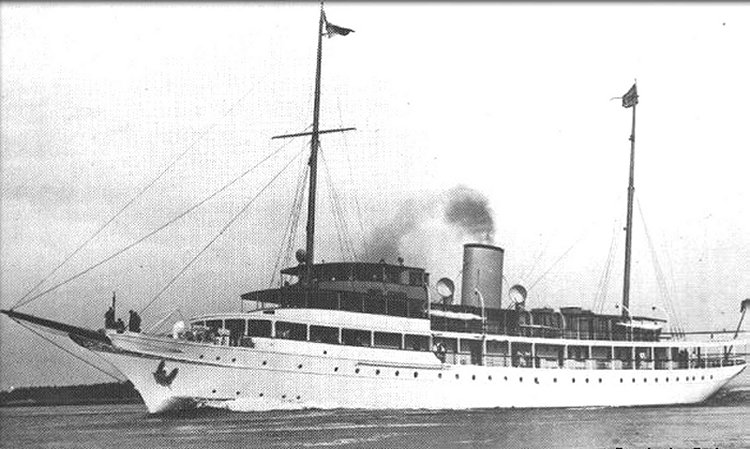 The “Caroline” belonged to a man named Eldridge Reeves Johnson. The yacht was named for Johnson’s mother, who died when he was a child in the 1870s — well before her son would become one of the world’s wealthiest industrialists in the two decades that spanned the late 19th and early 20th centuries. Amid the railroad tycoons, steel magnates, and oil barons of the Gilded Age, Eldridge Reeves Johnson became the era’s first great Media Mogul when he started an outfit called “The Victor Talking Machines Company.”

Eldridge Reeves Johnson was a giant of 20th century industry whom time seems to have forgotten. History has recorded that Thomas Edison invented the “tinfoil phonograph” in 1877, but nobody did more to popularize the “talking machine” than Eldridge Johnson. Edison may have invented the first practical sound recorder, but Eldridge Johnson created the modern recording industry. 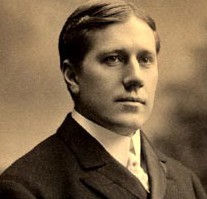 Johnson was born in 1867 in Wilmington Delaware and raised by a great aunt in Dover after his mother’s death. Despite graduating from the Dover Academy at the age of 15, it was the young Johnson’s ironic good fortune to be deemed unworthy of a higher education. Instead, he was sent to serve an apprenticeship in a machine shop in Philadelphia. He proved to be an able machinist and an industrious worker, but Eldridge Johnson longed for a higher calling.

After completing four grueling, monotonous years as an apprentice in 1886, Johnson found work at the Standard Machine Shop in Camden, New Jersey. After another eight years, he had saved enough of his earnings to acquire his employer’s interest in the business, and renamed it the Eldridge R. Johnson Manufacturing Co. Two years later, Lady Fortune walked through the doors of his shop in the form of one Emile Berliner.

Berliner was a German-born inventor who had experimented with various techniques for sound recording while working on improvements for another recently introduced, new-fangled machine, the telephone. Berliner determined that the quality of sound recordings could be improved by carving the vibrations into grooves on the surface of a flat disk, rather than etching them into the surface of cylinder as Edison did with his phonograph; the result was a machine that Berliner called the “Gramophone” (for which the recording industry awards — the Grammies — are named); Berliner also developed an early technique for producing multiple copies of a recording from a single original, in effect laying the cornerstone of the modern recording industry by developing the process of mass producing copies of a recording from a single master. 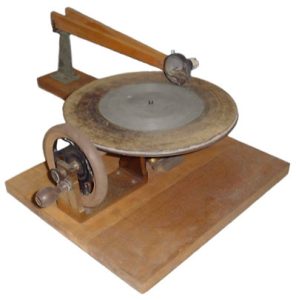 The original grammophone (not to be confused with Edison’s cylinder-based phonograph), the progenitor of today’s Grammy Awards.

Though it was cheaper and boasted better sound reproduction than Edison’s machines, the gramophone still suffered from one major drawback that limited its success in the marketplace. To spin the disk, the user had to turn a hand-crank at a continuous and steady rate of 150 turns per minute. Maintaining that kind of consistent speed — without jolting the machine and causing the needle to skip — proved to be more of a challenge than most users could endure. Berliner’s need for a more suitable means of cranking the turntable brought him to the Eldridge Johnson Manufacturing Company.

Johnson came up with a spring motor that, once cranked, would spin the turntable at a uniform speed long enough to play an entire record. Freeing the user from the need to hand-crank the turntable was the critical component that made the earliest gramophones practical enough to begin finding a place in millions of American parlors. Johnson’s company formed a partnership with Berliner to serve as the new machines’ primary manufacturer. 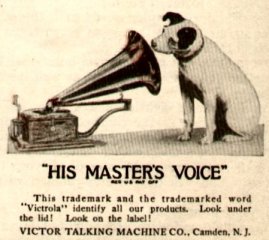 “His Master’s Voice” was that of Eldridge Reeves Johnson

In October of 1901, Johnson formed the Victor Talking Machines Corporation in Camden, New Jersey. In addition a line of gramophones, the company introduced one of the most famous and successful advertising campaigns ever devised: The image of Nipper, the white terrier, poised in front of the horn of a gramophone, head cocked, listening intently to “His Master’s Voice.” In 1906, Johnson’s company added a new word to the lexicon when a new, smaller model of the gramophone with a built in speaker horn was introduced as the “Victrola” —the first brand name to become synonymous with its product, like Xerox or Kleenex today.

The new Victrolas, with myriad improvements and innovations devised by Johnson and his associates, was an instant hit in the marketplace. Eldridge Johnson had the further presence of mind to recognize that it was going to take more than machines to make his company fabulously successful. He recognized early on that his ultimate success would depend not only in selling the machines, but in selling what people played on them.

To this end, Johnson turned his attention on the process by which records were manufactured. Beginning with the Berliner process, Johnson devised a process by which multiple “sub-masters” could be produced from the original master recording; In effect, Johnson’s Victor Company devised the means by which a virtually infinite number of copies of a recording could be mass-produced and sold to the public. 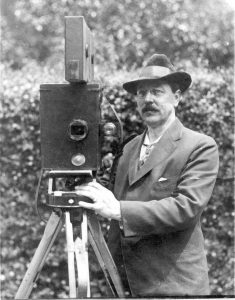 Johnson’s prowess as an engineer and inventor was matched by the commercial marketing skills of the Victor Company’s General Manager, Leon Douglass. Together, Johnson and Douglass created the first truly international ‘pop star’ when they signed Enrico Caruso, the Italian tenor, to a contract and began releasing his records by the millions to a public eager for something new to play on their Victrolas. Eventually other, more established artists were signed to similar contracts, and Johnson and Douglass devised the concept of paying a “royalty” to the artists for each record they sold.

With their combined engineering, manufacturing, and marketing prowess, Eldridge Reeves Johnson and his partner Leon Douglass laid the technical and legal foundations for the modern recording industry, establishing business models that are still employed by the industry more than a century later.

Over the ensuing decades, sales of Victrolas — and the records played on them — soared into the millions of units, making the Victor Talking Machines Company one of the most successful enterprises in the world, and making both Eldridge Johnson and Leon Douglass fabulously wealthy in the process.

Equally significant, the Victor Talking Machines Companies were international in scope, with wholly-owned subsidiary operations in Canada, South America, and Japan, and a 50% stake in the Gramophone Co. Ltd of England. The growth of Johnson and Douglass’s empire reached literally around the world, bringing into their orbits the most influential and prominent gentleman at the very highest levels of business, financial, and political circles. Particularly in the fast-growing field of electrical communications, Eldridge Johnson and Leon Douglass were two of the most well connected men in the world.

Johnson and Douglass also had the foresight to realize that the vagaries of commerce did not assure that their good fortune would last forever. After World War I, as the new art called “radio” began to find favor in the marketplace, Johnson made a momentous decision: In January, 1927, he and Douglass sold their interests in the Victor Talking Machines Company to a group of investment bankers, who in turn sold the company to the burgeoning new Radio Corporation of America, which would eventually form the RCA/Victor Company.

It is fairly common when recounting the annals of technology history to site the industrialist who expands on a new technology as the “father” of some industry, at the expense of the actual inventor who came up with the seminal discoveries in the first place. (See: Television: Sarnoff -v- Farnsworth).

And indeed, there are some who would take issue with the account above in that it would appear to give some short shrift to Emile Berliner’s actual contributions.

It is also somewhat out of character for me to be championing the industrialist over the original inventor (see the aforementioned history of television). But I do try to give credit where it is due. 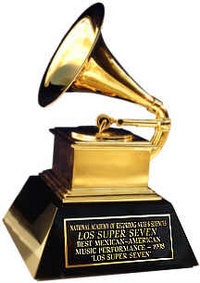 Emile Berliner indeed invented the gramophone — which today is the very symbol of outstanding achievement in the recording arts (One wonders: Edison called his cylinder-based recording invention the “phonograph.” If the awards were named for Edison’s device, would they be called “the Phonies”?).

But to leave the name of Eldridge Reeves Johnson out of this pantheon is akin to ignoring Henry Ford’s contribution to the auto industry. There were numerous precursors to Ford’s Model T, but Ford was the one who created an industry out of a rudimentary new technology.

Likewise, Eldridge Johnson laid the foundation for the recording industry of the 20th century (the demise of which we are witnessing here in the 21st…).

Eldridge Johnson was the Steve Jobs of his era. A German company developed the MP3 compression algorithm, and Apple was not the first to create a portable player (that was Diamond Multimedia, with the Rio PMP300). But the introduction of the iPod changed the landscape of the recording industry that Berliner and Johnson had been mutually instrumental in creating.

And now you know the rest of the story.

Footnote: Ever heard of “The Philadelphia Experiment“? That is the alleged radar-deflection experiment gone awry during World War II which supposedly caused a naval warship to disappear into another dimension. The myth has been the subject of numerous books and movies, and came up in the course of my research re: Townsend Brown. The ship that supposedly disappeared was the USS Eldridge – a nod, my covert sources would have had me believe, to Mr. Johnson. That should give you some idea what sort of rabbit hole I spent those years rummaging around in. Oh, and one other detail: Eldridge Johnson for many years owned an original manuscript of “Alice’s Adventures in Wonderland,” which he kept in a glass case in his library aboard the Caroline and proudly showed off to his guests. Apparently he liked rabbit holes, too.