It’s such a romantic notion, you know, this idea of data stored in “the cloud.” And such a colossal misnomer.

The terminology conjures up imagery of electrons gaily bouncing around in free space, creating fluffy pillows of digital vapor in the sky, sending data from the benign heavens into the gizmos on our desks, in our lap and in our pockets like a gentle spring rain.

But guess what? This is what “the cloud” really looks like: 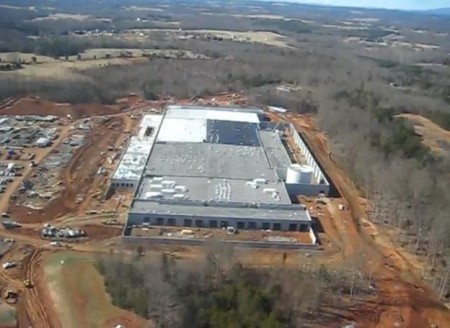 What you’re looking at here is an aerial photo of the massive “data center” in North Carolina that Apple, Inc. is getting ready to open sometime in the next few weeks. As you can see, it is anything but a digital Nirvana. It’s a fucking factory.

One can only imagine what is being assembled under that gigantic roof. How many thousands of servers will be installed in that cavernous space? How much electricity is it going to use? And where on earth are all of those electrons going to come from? Remember, boys and girls, most of America’s electricity – the electrons that keep our iGizmos humming – comes from a very basic, 19th century fuel source: coal.

That might be something to keep in mind: along with the factory workers who are jumping off of the buildings where our iGizmos are cobbled together, there are also thousands of miners spending their days in dark holes in Kentucky and West Virginia shoveling up the coal that generates the electricity that keeps our gizmos humming. If not that, they’re blasting the tops off of pretty mountains to get to the coal more directly.

So much for the dark side. Now lets get back to our fun and games.

Which brings us to ponder just what Apple is planning to do with such a massive facility. The most intriguing prospect revolves around the speculation that this data farm (another nice oxymoron) will be the operations center for Apple’s soon-to-be-announced “cloud-based version of iTunes” – the music subscription service that everybody (well, OK, me and about 5 other people I know…) has been waiting for since Apple acquired Lala.com over a year ago.

When Apple acquired Lala – and shut the service down a few months later – that created a market vacuum that has been filled – though only slightly – by such services as MOG.com, Rdio.com, and the sad, too-early-to-the-party orphan of music subscription services, Rhapsody. Oh, and of course the 800 pound gorilla that has still not found its way into the room, Spotify.

The whole subject of “subscription music services” remains a source of controversy. Will such services ever catch on with the music “consuming” public? And, if they do, what does it mean for the content providers – the musicians – if the “purchase” of music-by-the-unit” becomes entirely optional? These are the things I wonder about.

There are quite a few people I know who insist that subscription services will never catch on: that they use too much bandwidth, are too unreliable, that people want to “own” their music, that they want to “hold” the liner notes in their hand, etc. etc.

But as regular readers of this site know, I think the shift to “access” rather than “ownership,” to the remote storage of the entire history of recorded music, and access to what/when/where/ever you want is the inevitable destiny of all this digital technology. I could be wrong about that, but I think the photo above testifies to the likelihood.

Kyle Bylin, writing in the Hypebot post where I found the photo above, says it as clearly as it can be said:

Apple is known for its uncanny ability to offer consumers things that they didn’t know they wanted and in a way that makes it seem like they invented it.

Think about that for a second.

If Steve Jobs feels like it, he can invent subscription music – tomorrow. He can convince millions of users to sign up. And he has forged the landscape in a way that positions his service on top no matter what rival services accomplish. Apple will always be more integrated and cheaper than anyone else on the market will.

It’s easy to dismiss the prospects for clould-based subscription services, given the hang-over from old, product-based business models, and the paltry rate of adoption such services have seen thus far.

But think: Ten years ago, who who in their right mind would have imagined that buying digital downloads of music would be the significant portion of the recorded music business that it has become?

That’s the way these things go. New technologies are introduced, people wonder “what does anybody need that for?” and then somebody like Steve Jobs comes along, takes the time necessary to make all the elements work smoothly together, and a few years later everybody is wondering “why didn’t we think of this sooner” or “how did we ever live without this?”

If you have an iPad you know exactly what I mean.