About a year ago, when the iPad had been announced but was not yet on sale, I offered up a post entitled “It’s The Chair, Stupid,” which attempted to illustrate that what makes the new gizmo so exciting is not its hardware or software, but how the combination of those elements produced a device that would be used in a new way. 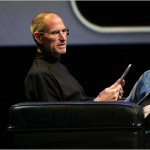 The new "default position" for using a "computer"

Where the television is the “lean back” screen, and the computer (laptop or desktop) is the “lean forward” screen, the iPad introduces a third posture to the equation. It’s neither lean forward or lean back, it’s “are you sitting comfortably” — it’s the insertion of the entire digital universe into your favorite chair. Where you used to sit with book, a magazine, or a newspaper, you now sit with – literally – the entire world at the tip of your fingers.

So it’s a bit validating to see no less a digital-arts-and sciences authority than John Gruber of Daring Fireball pick up that “It’s The Chair…” meme, as he did in this post last week:

Take that chair. The on-stage demos of the iPad aren’t conducted at a table or a lectern. They’re conducted sitting in an armchair. That conveys something about the feel of the iPad before its screen is even turned on. Comfortable, emotional, simple, elegant. How it feels is the entirety of the iPad’s appeal.

Writing mostly about the introduction of the iPad 2, Gruber’s post goes into some considerable detail about how the iPad changes numerous games. “The chair” is the symbolic encapsulation of all those games and all those changes.

Apple has whipped up a video that takes the meme even further. It shows people using the iPad in countless ways. But a lot of them involve chairs, and often very cushy chairs at that: