The State of the Celestial Jukebox: Part 1: Amazon’s Music Locker is Stupid 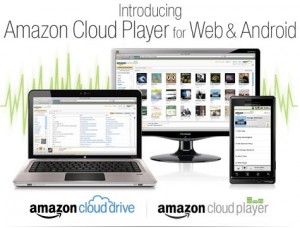 I know, everybody’s all excited because somehow Amazon is the first to market with a “music locker” service, beating Apple and Google to the punch.

But I don’t see what all the fuss is about.

I don’t see the advantage being able to store 1,000 songs (the approximate capacity of Amazon’s free service), when there are already services that store millions of songs “in the cloud” for me.

It’s like the year is ca. 1920: Horseless carriages are swarming over the landscape, and Amazon is first to market with an amazing new buggy whip. Ooh, this one has a sparkly handle!

Good luck smacking the side of your Model-T with it.

Now, admittedly my music “consumption” (Spoiler alert: I hate that word, especially as it pertains to music. Food I consume. Music is still there after I’ve listened to it…) habits are pretty atypical. Again, I seem to be there before the curve itself.

But these days, I am getting pretty durn near all the music I want right out of the cloud. After sampling both Rdio and MOG last year, I settled on MOG and, given that it’s still pretty much a Model-T, I’m pretty happy with what the service offers. I would say that 90% of the time, music that I want to hear is available, and I can listen to it at home, in my car, or at the office (oh, wait… I don’t have an office…)

Why would you care that you can store 1,000 songs in your own personal locker when there are now services that offer millions upon million of songs for roughly the cost of a single CD per month?

The argument for the locker seems to be, as expressed in this NPR piece, quoting Amazon VP Bill Carr:

I recently bought this album by Fitz and The Tantrums but I bought it on my work computer. But the minute I bought it I saved it to my cloud drive so it’s already available to me right here on my phone, I can click play and it will start playing.

I guess that’s a kinda slick feature, cloning a purchase from one device to another so that you have access to it from any location. But that just makes me wonder, “why didn’t you purchase it on your phone in the first place? You take that home with you, don’t you?”

So forget “the locker in the cloud.” The future of music maybe be in the cloud, but the cloud is in your pocket. 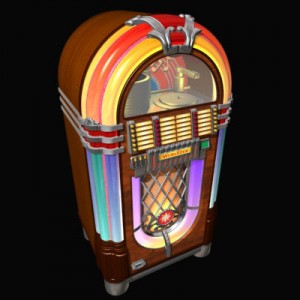 For more than a decade, I have imagined that my “Celestial Jukebox” would be some kind of rack-mounted device. Boy, was I wrong about that. It’s not a rack, it’s not a desktop computer, it doesn’t even need to be a laptop. Now the Celestial Jukebox lies in the palm of your hand.

“Cloud locker” advocates like those who are impressed with Amazon’s Cloud Player service seem to think that there is some great advantage to being able to listen to music through a web browser. When I’m seated with my laptop, there is occasionally some merit to that. But the real challenge lies not in streaming music through a browser; the real challenge is getting that music delivered to something you would actually want to hear it on — like a decent pair of external loud speakers.

So for me, the most notable recent development in music delivery is the addition of a feature called “Airplay” to Apple’s new mobile operating systems. Airplay takes any audio content on your iGizmo — locally stored or streamed from the cloud — and relays it via WiFi to an Airport Express or AppleTV, and that jacks it into your stereo system.

So this is how I listen to music these days: I launch either Pandora or MOG on my iPhone. Then I flip the incoming signal via Airplay via Airport Express to the stereo in whatever room I happen to be sitting in.

When I want a “random” (programmed by somebody-or-thing else) music experience, I launch a Pandora channel. And when I hear something I like enough that I want to hear more of that particular thing, I launch MOG and either listen to a specific album or the MOG-based ‘radio’ station based on that particular artist or band.

In that scenario, the need to actually store anything on my own device, or even in my own cloud locker, has been eliminated. It is already being stored for me. That is why a private storage locker is stupid.

The one argument I can understand for a cloud storage service is if you have music in your existing collection that is not available through a streaming service. Maybe you want to mix that music in with music that is available in the cloud. But you know, when Lala was around, it had a locker service, and after taking about two weeks to upload my 80GB music collection to their servers, I was surprised to discover that I really didn’t listen to the cloud-stored tracks much.

There is another argument for cloud storage, but it’s something of a stealth argument, a bit of reverse psychology, and it involves a recorded music industry that still doesn’t know which way is up, let alone have its head in the clouds

So stay tuned for Part 2: The Dinosaurs Attack!