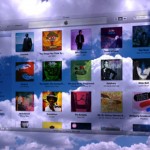 iTunes In the Cloud?

Amid reports last week that Apple is quietly lining up licenses for some kind of “cloud” service from the major labels, the debate about “access -v- ownership” likewise begins to show up in popular channels, like this post from Brad Hill at the Huffington Post:

That is really what the cloud represents: a different concept of ownership….

Most people dont like this deal, because it’s not true ownership. Drop the subscription, and you lose all your music, because it’s not really your music. I get that. But here’s the thing. It feels like ownership, and in the end, thats what counts to me and the minority loyalists who embrace music subscriptions. I feel like I own 11-million music tracks, because I can access them, transfer them, and listen to them as if I had bought them on iTunes.

Lets imagine I did buy them on iTunes. Id be at least 11-million dollars poorer right now — and believe me, I cant afford it. How much have I actually spent? Over 10 years, at $15 a month, Ive dished out $1,800 for ownership rights to a vast celestial library available anywhere, anytime.

via Brad Hill: Music Lockers vs. Subscriptions: Music Ownership in the Cloud Era.

Count me among the “minority loyalists” who continue to believe that “access” to $11-million worth of music for some nominal monthly fee is an infinitely superior model than chunking out 99c per track to own a very limited catalog (for “consumers,” anyway. I’m still not convinced it’s a viable model for the creators.).

And the idea of “cloud-based storage lockers” — like Amazon introduced a couple of weeks ago, like Google is supposedly developing, like Michael Robertson pioneered a decade ago — likewise leave me thoroughly underwhelmed.

Here’s the simple fact that even Apple would prefer you not grasp quite yet: all the music you could ever listen to in your lifetime is already stored “in the cloud” — i.e. on servers somewhere. The guardians of that vast library continue to dole it out to us in 99c chunks, and then think they’re doing us some kind of big favor by offering to “store” it for us remotely, so that we can have “access” to our purchases from “anywhere.”

Well, all of that is a crock, and it is only a matter of time before the music-listening public catches on to the fact — and subscription services catch fire. Buy your stock in MOG and Rdio now. Hell, Apple might still be a bargain at nearly $400/share.

Remember, 10 years ago, the “experts” were doubtful that music fans would actually pay even 99c for downloads – and now that is one of the most common ways that music is distributed. There is only one constant in the digital era, and that is: habits change.