Is Apple Finally Headed for “The Cloud” ? 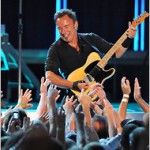 Whatever Apple is planning, "The Boss" will be part of it now that Sony has signed on.

File this one under” useless speculation.”

Because, while the news is intriguing, it really is pointless to speculate what Apple is planning to do with these licenses until they actually announce whatever it is they are going to announce.

Personally, I will be woefully disappointed if, after all this time (a year and a half since acquiring Lala.com), all Apple comes up with is a better “cloud storage” locker.

If there is no “subscription iTunes” component, Apple will have lost an opportunity to be as disruptive — and ahead of the curve — as they were with the original iPod and iTunes.

I don’t think Apple is motivated by their potential to be “disruptive.” I think they’re motivated by a clear sense of where the holes are in the market and their driving their digital truck right through it. So I remain hopeful that Apple is finally going to do what needs to be done, and pave the way to a viable subscription service.

And make now mistake, as disruptive as iTunes was when it started offering 99c downloads, a subscription service will be as disruptive again. So fasten your seat belts, and let’s just wait and see what Cupertino is going to come up with.