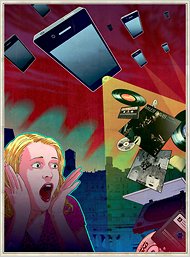 Hard to imagine, I know, but every now and then I read something that sums up the State Of The Arts far more succinctly than I have ever done with my rambling missives. Today I wish to share two such somethings with you, my vast and loyal readership.

There are two sides to this “music business” equation (a proxy for all business, really) that are effected by evolving technologies. There’s the creator/producer side, and then there’s the user/audience side.

Again, the easiest nomenclature for the user/audience side would be “consumer;” Then we could just call the two sides of the transaction producers and consumers. But the distinction is important: particularly where “digital” music is concerned, there is no “consumption.” Consumption applies, to, say, grapes: when you eat a grape, that grape is gone. It has been consumed. But when you listen to a digital recording, or even purchase a track from a server somewhere, nothing is “consumed.” The original is still there.

I keep stressing this bit of pedantics because I firmly believe that thought processes are formed by language. Vocabulary determines perspective and maybe even attitude. That’s why I keep reminding readers that “Internet radio” is an oxymoron, and you can’t paste a “label” on a stream of electrons and digits. But I digress…

From the user side of the equation, it was encouraging to read this assessment of the burgeoning new market for “cloud” services from Jon Pareles, a senior music critic at the New York Times:

I can’t wait. Ever since music began migrating online in the 1990s I have longed to make my record collection evaporate — simply to have available the one song I need at any moment, without having to store the rest.

Admittedly, Jon Pareles is something of a special case – a music critic who receives “20-30 discs in the mailbag” every day. But that predicament underscores the weakness of the existing “cloud” services:

For the moment, the much-ballyhooed cloud music players leave me unimpressed. Each has different mechanisms, features, prices and limitations, including one major one: They all depend on first uploading the collection into the cloud.

Pareles offers some prognostication on where all the technology will ultimately take us, and how it will be used:

For me, though, the great hope of the cloud is the subscription services, like MOG and Rdio. Their catalogs are deep, their interfaces sensible, their sound quality decent though not spectacular. For every fan who imagines herself a D.J., there’s a new social curatorial model arising in these services, somewhere between the old homemade cassette mixtape handed to a friend and full-scale broadcasting, with a giant potential library.

Which brings us to the other side of the equation, the creators and producers. How will they find sustainability in this new environment of infinitely accessibility? For that, we turn to the inimitable Bob Lefsetz, who last week published what I regard as a single-web-page summary of what it takes to survive or flourish amid the paradigms dictated by new technologies:

It’s like starting all over. All the old media you employed to get the word out is diminished or irrelevant. Chances are your audience doesn’t listen to the radio, or if it does, they don’t listen to the stations that might air your music. Oldsters listen to NPR. A segment there helps, but it doesn’t define. It’s best for brand new acts, not old farts. Late night TV is meaningless. If you’re friends with Dave, do it, but don’t expect a sales bump. Sunday morning TV is better, as are “Today” and the other morning shows, but don’t go on and do happy talk, if you can’t say something worthy of restatement/link, you probably shouldn’t invest your time. And I’m not saying to whore yourself out, to make stuff up or reveal personal items you don’t want to, it’s just that TV is a mass medium. And you’re niche. EVERYBODY’S NICHE!

Lefsetz is not everbody’s cup of tea. He can be direct to the point of being abrasive, but…so what? Despite being “old and grizzled” (that’s a direct quote) he has a good handle on how the New World really looks.

So Pareles is telling us how it works for the users, Lefsetz tells us how the creators fit through those new digital pipes. The two articles are a timely compliment to each and worth reading in their entirety. Here then the links again:

Just read those two articles and you’ll be all caught up, regardless of which side of the transaction you live in.