Julia Nunes: Emissary from The Future 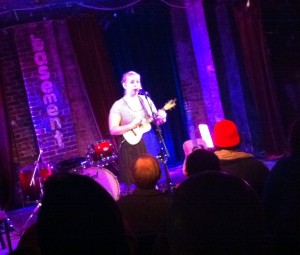 Julia Nunes came to Nashville last night, and brought with her the latest incarnation of “Music 3.0.”

If you’re not familiar with the name, Julia Nunes is the poster child for launching a career by posting cover songs on YouTube. I started hearing about her probably a year ago from my colleague Charles Alexander.

Julia Nunes’ clever, engaging, DIY videos have garnered hundreds of thousands — collectively, millions — of views on YouTube, and have generated enough of a fan base that she raised nearly $80,000 with a Kickstarter campaign to record a full CD of her originals. Now she has management (AC Entertainment, the people who bring you Bonnaroo) and promotion and distribution (Nashville’s Thirty Tigers) and a career with some air under its wings.

And, judging from the packed house at The Basement last night, she has an enthusiastic audience — some of whom drove considerable distances to see her, and most of whom were probably seeing her in person for the first time. That fact was underscored by the comment I overheard from one young woman in the audience as Julia took the stage, “I can’t believe she’s not on my computer screen!” Score one for “reality.”

Indeed, what I found most compelling about this show was not the performance, but the audience. Julia Nunes is a competent performer, but my tired ears can only take so much amplified ukelele (she could stand to take some lessons from Jake Shimabukuro). Her voice is strong if not particularly unique. Her full songs are sort of rambling, wordy dissertations with choruses that don’t exactly jump out at you (though that did not stop the audience from singing along on every song). On the other hand, I was rather taken with the short, minute-and-a-half songs she called “vignettes.” I liked the idea that those little tunes defied the rules of conventional song structure — and arrive in form that is probably just right for audience that for whom txt msgng is t nrm.

For somebody who started out recording solo videos for YouTube, Julia Nunes has an impressive stage presence. But the impact of the show has nothing to do with whether or not this particular old crank was enthralled with this particular ukelele slinger. The take away from this show was less about the performer and more about the audience. In that respect, Julia Nunes fully qualifies as Emissary from the Future.

The old paradigm was about developing artists first: Mr. Moneybags Impressario finds a promising talent, polishes him/her up, hires accomplished songwriters and skilled musicians, adds some showbiz sheen, puts their protege on the broadcast pedestal, gathers the multitudes, and laughs all the way to the bank.

Julia Nunes ascendance proves that the new paradigm is more about organically formed audiences. Put some DIY videos on YouTube. If they are clever and infectious, they ‘go viral.’ A virtual audience starts to self-organize, and the artist and the audience develop simultaneously. Despite whatever reservations I may have about her as a performer today, I suspect that the live version of Julia Nunes that appeared last night is just a hint of the performer she will be a few years from now. She and her audience will grow together.

When I first started pontificating about this “Music 3.0” theory of mine, the example I cited to illustrate the concept was the footage from “Any Day Now,” the Ten-Out-Of-Tenn documentary where, at the end of the show, the performers came down from the stage to lead the audience in a rousing rendition of the Bob Dylan classic, “I Shall Be Released.” In that moment, the proscenium was dissolved. There was no barrier between the performer and the audience. That’s “Music 3.0” – no longer the exclusive purview of artists on a pedestal, but a mutually shared experience. In the new paradigm we are all artists, we are all audience. 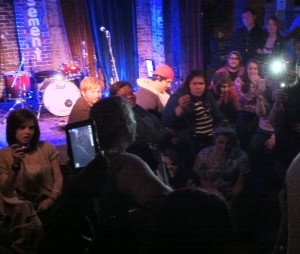 I have a new example to illustrate the theory now.

Before her last song at The Basement last night. Julia Nunes asked the audience if she could take her guitar (mercifully putting aside the ukelele) and come down off the stage to perform from the middle of the room, entirely “acoustically.” The audience cleared a path for her, found her a chair, gathered around her. She entered their space and they entered hers. And of course, they all knew the lyrics to the song, and sang along with her. They toasted her with their cell phone cameras and recorded the performance. There was no longer any separation between performer and audience. A mutually shared experience.

I guess I better start learning the lyrics…

While we’re at it, here’s a cell-phone video of Julia performing “The Debt” last night at The Basement in Nashville: