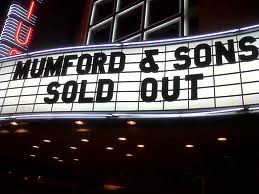 ...but tickets are still available!

OK, I’ve thought this all through a little more, and will concede now that Mumford & Sons and The Ryman Auditorium don’t really suck.

But boy, the process of buying tickets for Mumford’s three shows at the Ryman in March through Ticketmaster sure does.

First, a brief recap of my personal history with the Mumfords, because it is, I think, fairly illustrative of how things work in an era when the imperative to buy “records” simply no longer exists.

I think Mumford and Sons started appearing on my musical radar a little over a year ago. Can’t recall now where they first showed up, probably one of the four or five channels I monitor regularly on XM Satellite Radio. Then I think they showed up on the Grammy Awards freak show last year doing a set with some human frog impersonator… what was his name… oh yeah, “Dylan.”

But it wasn’t until I grabbed their 2010 release Sigh No More from MOG.com that I started to have a greater appreciation of this band’s very energetic, organic, acoustic… Oh fuck, I don’t know what to call it, it’s just really very original, and uplifting and engaging in a way that very little music is these days. So I was hooked.

But please note, I did NOT “buy” the album. I listened to it via my streaming music subscription service. Sigh No More was just one of the hundreds of records I listened to last year for all of $10/mo. And then I created a “Mumford & Sons” channel on Pandora, and we listen to that channel a LOT. 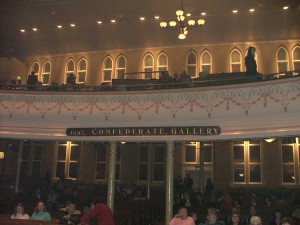 Maybe the best seats in this - or any - house.

But all that means is that so far, Mumford & Co have earned several pennies for all the enjoyment we have gotten from their music. All along, I figured, the big pay off — for the band and us — would come when they finally came to Nashville and (I hoped…) would play at the Ryman Auditorium. For all it’s short comings (cramped aisles, hard wooden seats, and pray whoever sits in front of you is not wearing a cowboy hat…) the Ryman is still one of the best live music venues in the country. And if you can get the front row of the balcony (aka “The Confederate Gallery”), it may be the best live music venue in the world.

My point here is: in the era of cheap – essentially costless – recorded music, seeing the act live is how they’re going to get my money. So when Mumford and Sons announced – like a week ago – that they’d be playing 3 shows at the Ryman early in March, I figured it was time they got my bucks.

I can be so naive some times.

Tickets for the Mumford’s Ryman shows were set to go on sale via the Ryman website starting at 10AM on Saturday February 4th. So at 9:59 AM I – and, I gather countless thousands of other Mumford fans, sat with browser windows loaded and ready to fire the moment the clock struck 10AM.

Lotta good that did me. Because even though I was submitting a ticket request within seconds of the window opening, all I got in response was: 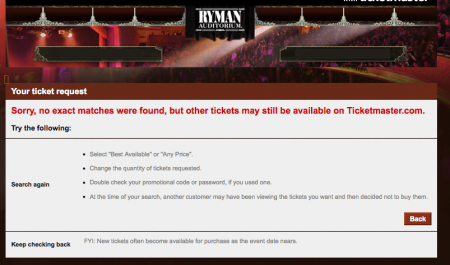 And this, apparently, was the common experience of most of people who tried to buy tickets. All the evidence you need of what a tortuous, frustrating, and ultimately futile experience buy tickets for these shows started to show up within minutes on Mumford & Son’s Facebook page, which as of this writing has well over 300 comments. Here are a few that tell the tale:

I did not realize it at the time, but this whole fiasco was unfolding in real time via Twitter. Typical tweets directed @TheRyman told a similar tale:

There are dozens, maybe hundreds more, tweets to that effect. And yet, @TheRyman kept insisting that the show was not sold out, and that tickets were still available. As late as 10:44 AM, @TheRyman tweeted:

and finally, a little after 11AM:

Well, dear Ryman Official Tweeter, maybe YOU called it at 11:09 AM, but for nearly everybody who tried to buy tickets to these shows when they went on sale, it was over within minutes. And, judging from the scarcity of tickets when they did go on sale, and the number of people who report being able to score no more than single seats, it was really over before it started.

Since giving up on my desire to see one of these shows around 10:20 yesterday morning (other obligations called…), I have given considerable thought to the message in that first screen shot above, the one that simply says, “no exact matches were found, but other tickets may still be available…”

In defense of the Ryman and the band, that message does not say “sold out.” But for the average user, who refreshed countless times – and has to enter a stupid “captcha” code like this:

…over and over again with every attempt to refresh, the shows may as well have been sold out. There is really no meaningful difference between “not sold out” and “can’t buy any tickets.”

And as if to underscore just how fucked up this whole process was and still is: the screenshot at the top of this post is what the Ticketmaster site is STILL displaying if you try to purchase tickets today, 24 hours AFTER @TheRyman “called it” and announced the shows sold out. As of 8AM Sunday morning you can go to MumfordandSons.com and the listing still says “Buy.” And if you follow that link it takes you right back to the Ryman’s Ticketmaster box office, and let’s you go through the same futile, frustrating experience that most users encountered BEFORE the shows were officially “sold out.”

So anybody who concluded between 10AM and 11:09 that the entire run was sold out would have been entirely justified in coming to that conclusion, because now @TheRyman says it IS sold out, and the website is presenting the same “still available on Ticketmaster.com” reply page.

It is hard to imagine a process that could be more fucked up than this one.

I’ve belabored this point long enough already. There are a lot of factors involved, starting with the immeasurable popularity of the band and ending with Ticketmaster’s near monopoly of the business of ticket vending for large venue shows. The attempt to prevent scalping is probably some kind of factor, but despite the “paperless ticket” policy for these shows, there are tickets being sold at resale sites like Stubhub and Craig’s list.

My point for now is simply: there has GOT to be a better way to handle a sale like this. 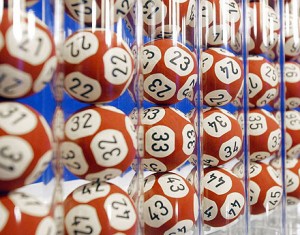 It's already random, so why not?

Why not a lottery of some sort? Say the lottery opens at 10AM. And the window to enter the lottery is open for 24 or 48 hours, take your time, no hurry, no need to pound multiple browser windows to try and snag the few remaining seats. Once the lottery window closes, winners are chosen in some rationally distributed quantities of 1, 2, 3 or four tickets. Go ahead and make them paperless if you think that will help minimize scalping.

Yes, the resulting distribution of tickets would be entirely random. But it’s hard to imagine how the process could be any more random than the one that people experienced yesterday, with a few people snaring tickets – mostly single seats – and most people being spurned by a system that STILL SAYS “tickets may be available…”

I don’t know if that’s any kind of solution, but I do know that the system we all encountered yesterday sucks a huge bratwurst.

But just how fucked up this all was driven home by one final irony. Yesterday afternoon at 2:37 I got into my car, where the radio had been tuned to WRLT – Nashville’s Radio Lightning (love Fred Buc’s “Retro Lightning” on Saturday mornings). And the minute the radio fired up, what do you think I heard? Of course, “Mumford and Sons… at The Ryman…Tickets on sale now!”

There is so much talk these days about how “live” is the only remaining salvation of what is left of the “music business.” And yes, the shows are sold out, so some seven or eight thousand people will indeed have the pleasure of spending an evening with Mumford and Sons. Maybe I’m just expressing the “politics of envy” here.

Of this much I am reasonably certain: whoever got tickets to see these shows, get cleaned up and dress nice. It’s going to a good night for a hookup: There are going to be an awful lot of single people at these shows.