T-Minus 1 – How The Return
To Scotland Came About 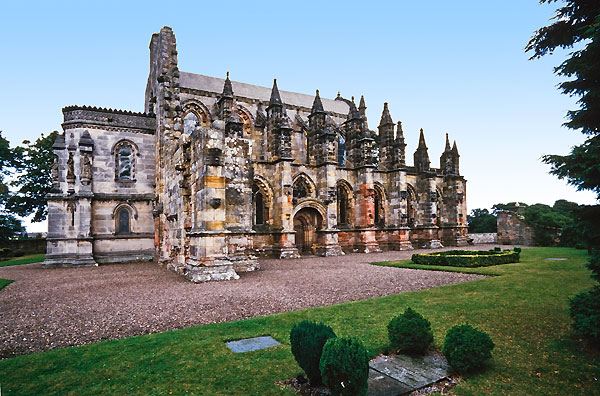 This is the third installment of a series on how my trip to Scotland / England came about. The first installment is here, the second installment (a bit of a sidebar) is here.

Listen to John Doan’s harp guitar while reading this post:

One of the most stunning places we visited in Scotland last October is a small church several miles outside of Edinburgh called the Rosslyn Chapel.

Rosslyn Chapel, scaffolded for restoration during our visit in October, 2012

If you’ve read “The DaVinci Code” or seen the movie, you might recognize the name. Dan Brown wrote the last scene of that story at the Rosslyn Chapel. The bones of Mary Magdalen – the real “Holy Grail” as portrayed in the novel – supposedly having been hidden there, in a a secret crypt concealed under the foundation of the chapel when it was built during 15th century.

We almost didn’t go to Rosslyn. When it was first suggested to us, I looked it up on the web and the first thing I noticed on the website was

Please note that there is no photography or video allowed inside Rosslyn Chapel.

And when I read that I thought to myself, “well, that’s a deal breaker….”

But I talked it over with Ann and we agreed that it would be worth seeing even we couldn’t take pictures inside. We figured it in to the itinerary for the last full day of our trip, when we would be back in Edinburgh for two nights and still have the rental car at our disposal.

So on morning of the last day of our tour of Scotland, we ventured out of Edinburgh about 7 miles south to the village of Rosslyn.

And yes, the interior of Rosslyn Chapel is truly extraordinary. Nearly every surface is adorned with detailed masonry carvings depicting the history of the area, the chapel’s founders and builders, or a passage from the Bible, all rendered by the most skilled stone masons of the 15th century.

In the centuries since its construction, the tiny Chapel as been through all kinds of depredations, from serving as stable for Cromwell’s cavalry in the 17th century to an ill conceived conservation effort in the mid-20th century that coated all the carvings with an impermeable layer of magnesium fluoride that trapped moisture inside the stone. Just about the time that The DaVinci Code was released, the Sinclair family that owns the chapel and surrounding estate embarked on a more enlightened course of preservation, and now, in the wake of the novel and the movie, the Rosslyn Chapel is among the most popular tourist destinations in all of Great Britain.

Ann and I spent most of the morning of our last full day in Scotland there. We made a lot of photographs of the exterior, and spent enough time inside to come out pretty well awed at what we’d seen. But, per the rules, no photos of the interior.

Fast forward now to January 28th, when I received an e-mail from a musician named John Doan. John is is primarily a harp guitarist; his home base is Salem, Oregon.

If you’re not familiar with it, the harp guitar is an instrument that starts as a guitar, but is embellished with an extension of the body of the guitar that supports some number of open, unfretted strings, usually bass notes, that are plucked separately in the same manner that the strings of a harp are plucked. John Doan typically plays a variation of the harp guitar that includes a further set of “super treble” notes that are strung musically above (physically below) the 6 guitar strings.

I can’t recall now when I first discovered John Doan’s recordings, most of which I purchased via iTunes during the period when I was still paying for downloads (which I rarely do now, with the advent of streaming subscription services like Spotify). But since I first discovered him I have been an avid fan of his Celtic-infused, sonically rich recordings that evoke the spirit of the islands with which I am so enamored. I met John briefly once, at an annual event called “The Harp Guitar Gathering” when it was held in Indianapolis in the fall of 2010. That’s probably when I put myself on his mailing list.

So I get this e-mail from John Doan in late January. And after the usual “this is what I’m up to…” stuff, I scanned his tour itinerary at the bottom of the message. And that’s where I saw:

Whoa. Did I read that right? A concert inside the Rosslyn Chapel??

I quickly fired an e-mail back to John.

Can you use a roadie/photographer on these gigs?

I need an excuse to go back to Britain this spring…

Where “back to Britain” was a link to the site were I was gathering and displaying our photos from the trip in October.

John’s reply to that was pretty non-committal, but the more I thought about it, the more intrigued I became about the proposition, so I sent another message:

Please forgive the quick “need a roadie?” message that I sent earlier
today.

This time… I think I’m serious….

..after which wheels started turning…

Long story short: I’m leaving tomorrow afternoon, and will meet up with John and his entourage of wandering minstrels a week from today at Rosslyn. And I will have permission to photograph his concert inside the Rosslyn Chapel.

Two weeks ago Ann and I encountered a Scottish photographer a the TACA Arts & Crafts fair here in Nashville. We got to talking, and I told him that I would be going to Scotland soon, and that I’d be photographing inside the Rosslyn Chapel.

Yes, it is. But I’ve got special dispensation.

And that’s why I’m going back to Scotland tomorrow.