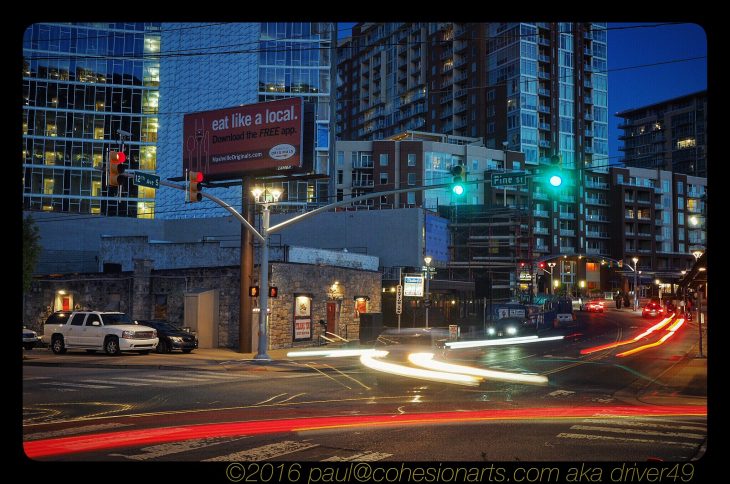 I’m looking for some photos to submit to a show under the title “Signs of The Times.”

I just had this idea that a photo of Nashville’s iconic Station Inn bluegrass venue – surrounded my towering new condo and office-tower developments might fit the bill. It certainly is a sign of the times we’re living in here in Twangtown.

The image above is one from a series I haven’t sorted or edited yet… I edited this one with Snapseed in my iPhone and posted it to Instagram with the header “Endangered Species.”

That header induced some unintended dismay for one of my followers, so I sent her this clarification that was recently published in a special section of The Tennesseean about the pace of development here and the impact it’s having on the community:

Though it seems the Gulch is changing daily, the Station Inn isn’t going anywhere. Charlie Wehby — owner of the land on which the Station Inn sits — says he has no plans to sell the property to developers, though some have approached him over the last several years: “J.T. (Gray) and I have a pretty good rapport together and as long as we’re around, I think the Station Inn is going to stay there.”

That said, nobody can promise forever. And the consensus among the cognoscenti is “once they come for The Station Inn, ‘Nashville’ is over…”

I don’t agree entirely with that sentiment. I think that Nashville is much about the people than any building come or gone. The growth we’ve seen over the past 10 years or so has only deepened the well of creative souls who are drawn to this city.

And, who knows? Maybe one of these days that priceless corner to will be sold, and developed. And maybe the developers will have the good sense to make the ground floor of their new whatever-tower a new Station Inn. That wasn’t really the plan, but I think it worked for The Sutler.