Another highlight from the Nashville Guitar Mash 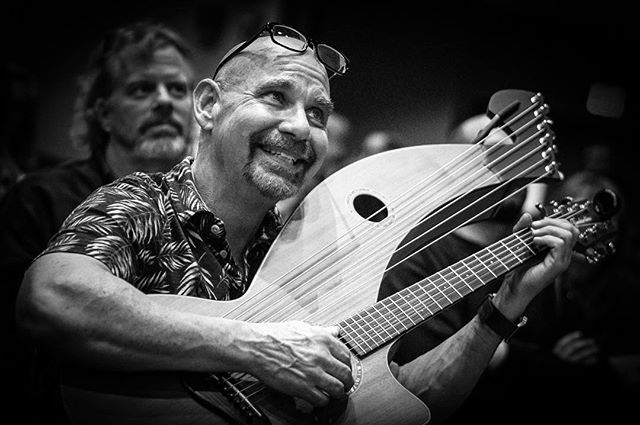 This fellow’s name is Chuck Thompson; Chuck is an accomplished photographer in his own right who’s mission is “making musicians and business look good.” See his work at www.pickchuck.com

Like so many of us here in Music City, Chuck is also a musician. If you’re not familiar with that odd-looking instrument he’s playing, it’s called a “harp guitar” – an instrument from the turn of the 20th century that has found renewed popularity here in the 21st century. It combiners a conventional fretted guitar neck with several unfretted bass strings strung across an extension of the guitar body that play like the strings of a harp. .

But what is remarkable about this photo is that Chuck is not on the stage: he’s in the audience! He was right there in the front row, playing along with luminaries like Jerry Douglas, Keb Mo and John Oates at the Guitar Mash, an event that invites the audience to actively participate in the performance instead of just sitting there and flapping their hands together at the end of each song. For more on the event, read my commentary here.