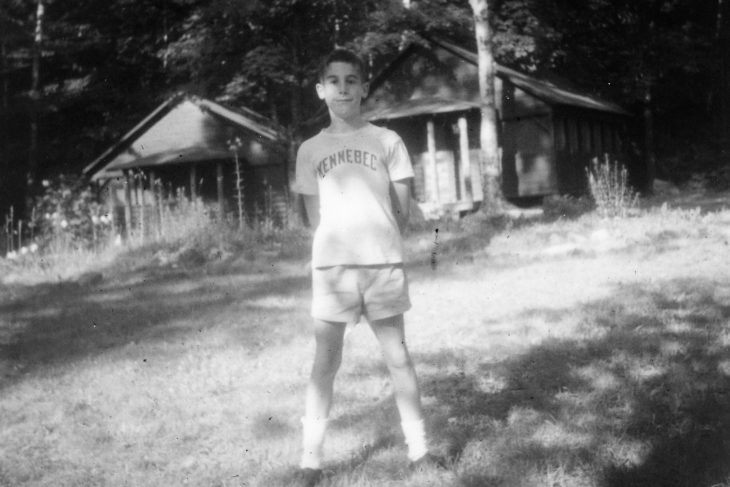 Think of a period in your life that has particular resonance for you—a time when important events occurred, or when you were especially happy or unhappy. Imagine capturing that whole period in a single image, as if you were creating a painting or photograph. Who’s in the picture? What are they doing? What are the expressions on their faces? Try to describe this picture in such detail that a reader can see it as clearly as you do.

And this is “the picture:”

The period, generally speaking, is the summer of 1962.

The scene is Cabin 4 at Camp Kennebec Junior in North Belgrade, Maine.

And curled up on his bunk near the door, an 11 year old boy is crying.

The cabin is what you’d imagine of “New England Rustic.” It’s all wood – pine, probably – and painted dark brown on the outside and a lighter shade on the inside; the bottom half of the walls are solid wood, the upper half is open and covered with screens; outside, large wooden shutters are suspended by hinges and ropes under the eaves of the overhanging roof; the shutters are there to be lowered when the camp is vacant in the winter, or in the event of severe weather during the summer.

The boy is wearing a grey t-shirt with the word “Kennebec” arched in tall block letters over his chest. Or maybe it was a maroon t-shirt. The camp colors were maroon and grey and the trunk at the foot of his bed (I guess that’s why they call it a “footlocker”) contained an equal quantity of grey and maroon t-shirts, so he would have been wearing one or the other. And khaki shorts, and no underwear. That was one of the stranger rules at the camp: none of the kids wore anything under their khaki shorts. That was fine most of the time, but then there were the not-infrequent occasions where’d you’d be sitting across from a fellow camper, and looking up his shorts at his junk. Except of course it wasn’t called “junk” in 1962.

Cabin 4 is one of sixteen identical cabins that ring a grassy circle under the tall Maine evergreens. Inside the circle is where, every morning, 8 or 10 kids pour out of each of the cabins to perform their daily jumping jacks, sit-ups and squats before shuffling off to the dining hall that on too many mornings would start breakfast with a bowl of prunes.

Jeezus-H-Fucking-Christ I hated those prunes. I just couldn’t eat them. If I put one in my mouth and tried to chew on it, I just gagged. There was no way I was going to eat those fucking prunes – and that just gave my delightful, 11-year-old bunk mates in Cabin 4 one more thing that they could torment me about all summer.

It is late in the season now, and even though I’ve been writing home that every thing is fine, everything was definitely not fine at Camp Kennebec in the summer of 1962.

Back in Cabin 4, I am lying on my bunk crying, because because 400-some miles away in New Jersey, my eleven-year-old-life is being dismantled.

1962 was the year my mother remarried, though it had only been four years since my father died – or, as I’m thinking of it lately, just disappeared.

Her new husband, the guy I would now have to address as “Dad,” came into our lives with the weird, bizarro name of “Monroe.” Who the hell names their kid “Monroe?” That’s a LAST name, not a first name. That’s like naming somebody “Wilson Smith” or “Jones Anderson.” This guy’s name was Monroe Stein. Two last names.

The oddly named new step-father was living in New York City when he and Mom married, in an apartment within walking distance of his small lone-attorney law practice. I visited that apartment once, and the only thing I remember about it is a silver cigarette box engraved with some sentiment about Monroe’s 50th birthday. That seemed really old to me. I wondered why my mother had married such an old man. My own, actual father would have been only 41 at the time.

When Mom remarried, we were still living on the Jersey Shore, in what I now gleefully describe to people who ask where I’m from as “Springsteen Country” – Monmouth County, New Jersey. While Bruce was growing up in Freehold, my family lived nearby in an affluent enclave called Rumson.

Monroe wanted to move the whole family into Manhattan, but my mother struck a bargain – hell, the whole marriage would turn out to be some kind of business deal – to move instead to a suburb with a shorter commute into the city.

The wedding was held at Monroe’s private club in Manhattan in April, and the newly anointed “Dad” came to live with us, but later in the spring they bought a house in a town called Maplewood – which perfectly adhered to the definition of a “suburb” – a place where they cut the trees down and named streets after them.

Shortly after they found and bought the house, we all piled into Mom’s Chevy Belair station wagon – silver/grey with a red vinyl interior – and drove up to Maplewood on what I recall as an unseasonably warm Easter Sunday to see the new domicile. Then we went back to Rumson, finished the school year, and I got sent off for my second year at Camp Kennebec.

This photo was probably taken on one or the days when they didn’t serve prunes.

My older brother Arthur had already been to Kennebec for several summers, so he didn’t have to go back that summer; and my little sister Dotsie (there’s a story there, too…) was still too young for sleep-way camp. That’s what they called it in those days, “sleep away” camp. That was a euphemistic way of saying that your parents didn’t have to deal with you for two months, leaving you instead at the mercy of a dubious array of counselors you’d spend the summer calling “Uncle.”

So at the end of June, off I went to “sleep-away.” Then the family started packing up the only house I’d know for my entire life and getting ready for the move. And while they were at it they sold my father’s little wooden sailboat – while I was off in the Belgrade Lakes, finally learning how to sail.

At Kennebec, the cabins are all assigned to one of several effectively extinct New England Indian tribes. Cabin 4 was assigned to the Passemequody tribe; our nickname was “the Passies.” The others were, the Malacites (aka “the Mallies”), the Norwalks (aka “the Norries”), the Micmacs (yup, “the Micks”) and the Penobscots (aka “the Pennies.”) I guess that makes a summer camp a place where you kill off all the natives and name cabins after them.

In the bunk beside me was a kid named Katzenberg. Does the name sound familiar? If you follow Hollywood much, you might recognize the name. It belongs to a movie mogul named Jeffrey Katzenberg, who ran the Paramount and Walt Disney Studios before joining forces with Steven Spielberg and David Geffen to form a new studio; He is the “K” in “Dreamworks SKG.” Decades later, as his mogul-star ascended, his reputation for an obnoxious management style was summed up in a story about telling a subordinate, “if you can’t come in on Saturday, don’t even bother coming in on Sunday…”

I got to experience Katzenberg as an 11-year old terror who was already practicing his concentration camp skill-set, though in those days it mostly took the form of relentless mocking taunts and short-sheeting my bed with shaving cream. Katzenberg was the one who led the taunts at breakfast when I gagged on those fucking prunes.

My mother saved all the letters that I wrote home during the summer, and I rummaged through them recently. I remember them differently than they read now. For the first several weeks, they read like some camp commandant is standing over me, watching me scribble the words, “camp is great and I am having fun” several times a week during the rest period after lunch (where, mercifully, there were no prunes, but too often some other ghastly confection that I could barely palate).

And then about 5 weeks in, the letters take a disturbing turn. All of sudden, I hate Kennebec, and I am scrawling in large capital letters, “I WANT TO COME HOME!”

Because it is finally dawning on me that, when this gruesome summer of torment is over, I don’t even get to go home again. By the time I’ve taken the boring four-hour bus ride back to Boston and the two hour flight back to New Jersey, the family will have moved from the frolicking seashore, where the roads were relatively flat and easy to ride a bicycle on, to leafy suburb that was all steep hills. And all I could do in the meantime was send letters to my mother that cried fervently “don’t lose any of my stuff!”

So there I am, lying on my bunk, alone, while the rest of the kids are out doing what kids do at summer camps: playing baseball, swimming in the lake, sailing, tether balling and capturing flags.

You want details? OK: The bunk is one or those standard-issue military things,` with a wire mesh stretched between across the top; the bed frame is squared, the head and foot are curved metal tubes. The mattress is likewise the cheapest thing that money can buy, maybe four cotton-stuffed inches thick, covered in a blue-and-white striped canvas or muslin. To contend with the cool Maine nights, the mattress was covered with coarse, dark grey wool blanket over flannel sheets. The sheets are flannel, rather than cotton; “sheet blankets” they were called. That’s what Katzenberg and his Cabin 4 comrades used when they folded the bottom sheet in half and filled it with shaving cream.

But all you really need to know is that mine is one of eight such beds in a brown wooden cabin at a kids summer camp in the woods of Maine in the summer of 1962.

And curled up on the bed, an eleven year old boy is crying.

This trip down Memory Lane continues with “Return to Brigadoon”

Thanks to Maria Browning and The Porch for the prompt.