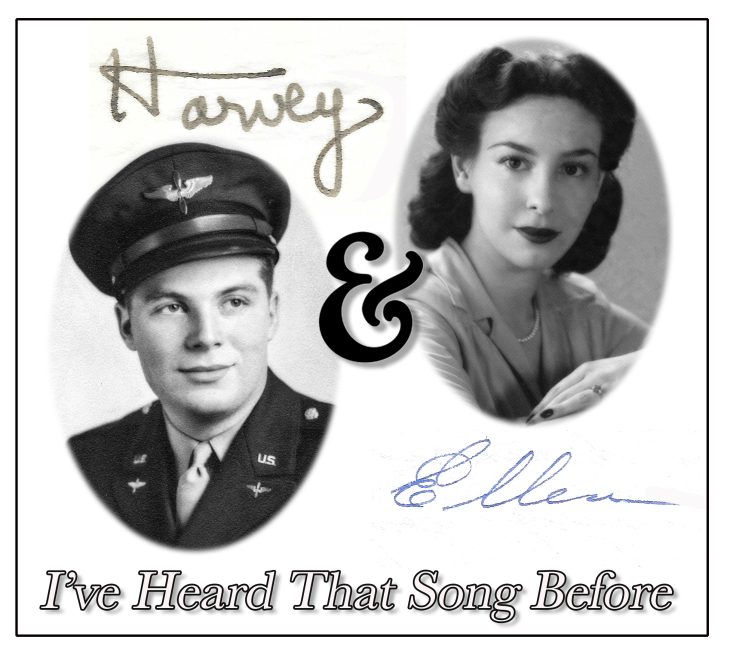 There was an Army Air Force communications school at Scott Field in East St. Louis. My good friend Howard Beck kept telling me that he wanted me to meet his brother Norman’s friend who was at Scott Field who was only free on Monday nights. At the time I had a regular Monday night date with a boy named Dan, and told Howard, “I don’t break dates.” But Howard kept insisting that his brother’s friend and I would really like each. I finally agreed and broke my usual Monday date. I was working at the USO downtown and Howard arranged to pick me up there.

November 30 in Missouri “dawned cold, snowy… blizzard-like.” Howard and Ellen rode the trolley through the drifting snow to have dinner at the home of a friend…

And there was this really cute guy in the uniform of the U.S. Army Air Force Cadets named Harvey Schatzkin. We really did like each other. We had a perfectly great evening with lots of repartee and jokes. When the evening was over, Harvey took me on the trolley back to my apartment, and we made a date for the following Monday. I am not sure we knew it that night but I know now that it was “love at first sight.”

A week later they had their first date: Chinese food and a Hedy Lamar movie called “White Cargo.” Harvey returned to Scott Field and graduated from Officer’s Candidate School. Then the Army sent the newly minted Second Lieutenant to several locations on the East Coast before he landed at his first post: a weather station in Greenland.

Which left their new-found devotion to the vagaries of the mail in the middle of World War II.

I have all the letters. There are hundreds of them.

Harvey and Ellen’s letters, aka “The Pile.”

Harvey and Ellen’s letters, aka “The Pile.”

One of the things I have been doing over the past few months of Involuntary Covid Incarceration is reading all these letters and dictating them into digital documents. I’m almost done going through the “first tranche” – the letters they wrote between their meeting at the end of 1942 and their wedding in New York in January 1944. Whatever the final result, I think those two markers will serve as the bookends, so to speak.

I was feeling kind of miserable and I really couldn’t think why. I guess I figured I would never see Harvey again. We went to Alton and I was even more unhappy. In the middle of the afternoon the phone rang. It was Harvey. He had tracked me down and wanted me to come back to St. Louis. My father I thought I was crazy, but I talked him into leaving and taking me back to town. Harvey and I spent the evening together and we decided we were in love. We sort of got engaged. I don’t remember an actual proposal, but it was sort of taken for granted that we would get married someday.

While everybody is honoring their father’s on this Pandemic Father’s Day in 2020, I am going to honor both of my parents by sharing the beginning of their correspondence, exchanged over New Years 1942-43. They have known each other about a month at this point.

(That’s the first time I ever started a letter that way; hope I spelled it right.)

In a room about six times too big for him sits a somewhat sleepy Second Lieutenant who has spent the day (1) signing papers and filling out forms, (2) thinking about you.

It’s been another one of those typical army days –standing in lines and waiting around while nothing happens. As usual I told six captains, ten sergeants and three men who sell Good Humors my name, address, birthplace and favorite seafood.

Tomorrow I have to go back and continue some more of the same since I did not get anywheres near finished today. Also tomorrow I shall move into the Bachelors Officers Quarters. By then I should have an address and will expect you to send me cases of champagne, boxes of caviar and other little items essential to my well-being.

I am wondering if you have enough Air Corps knickknacks to get along avec. I’ve had my agents working on the case and they have come up with the following information which may be of interest to you:

To begin with, very popular this year are full-size propellers; they are strapped across the back and considered excellent for travel in crowded buses; Another item that is definitely chic for junior misses, sub-debutantes and Pomeranians are old carburetors; A spray of wisteria and a few drops of 100-octane gas are added, and the whole business made into the neatest little hat you’ve ever seen. Also high on there list are hearts of newly-minted Second Lieutenants – but, then, what would you do with more than one?

Honey, tonight while waiting to see if I can sell the hotel the idea of letting me have a bed upon which to toss my weary bones and blood and stuff I heard music pouring out of the little bar they have here – the Kotex room or something, I think it’s called. Like a little, hungry tyke on a cold day looking into a bakery shop I pushed my nose against the glass. It was just one of those quiet little bars with a three piece orchestra, soft blue lights, and scattered couples sitting around. I figured it would take a long time to get your hat on and get down here, but something inside me just got all knotted up, and all I can think of was how I wish you were here, darling.

I kind of think I’m getting tired so I can sleep (Gee wouldn’t that make a clever song title) so I’ll close this one up. I’ll write you again as soon as I have an address.

All my love, darling, and right now I’m kissing you good night.

The next day, Ellen wrote back….

Gee, it seems funny writing that.It’s the first time for me, too.

I was so glad to hear your voice today. And you called just at a time when I was thinking hardest about you, wishing you were here and thinking about how much I love you.

The trip back from the station was like a rocket trip to some other planet, and equally as terrifying. In fact I’ve written to General Arnold to see if that cab driver could not be presented a pair of wings. He handled that cab beautifully in the air.

Daddy fell down a flight of stairs today and hurt his back! He can’t move. The doctor doesn’t know whether there are any broken bones or not. He told him to stay in the bed until Saturday, and then come down for an x-ray. He’s better tonight, though. He can turn over, etc. When he came in this morning he was a pale chartreuse. His stomach has been bothering him for two weeks, and now this. If it weren’t for you darling I wouldn’t have a very happy New Year.

As I told you over the phone, I lost my wallet with our gas ration books. See what you do to me? I never lose things.

I think I have enough Air Corps bric-a-brac. In fact if things get too tough, I’ll turn myself in to the scrap metal drive.

I really didn’t have to tell anyone about us. People just looked at the expression on my face, and guessed that I was in love. They don’t know how wonderful you are.

I was going to a party tonight. They all insisted I come, date or not. But now I feel that I ought to stay home with Daddy.

I went marketing today. I just love to go marketing. You find such interesting things, things you’ve never eaten before, but someone must.OK, I’ll take a can. As I stood in line with my booty, I trembled from head to foot, suffused in shame, thinking what Mr. Wickardwould say if you could see me.I looked around, and instead of the usual expressions on the faces of my fellow shoppers – The pensive look: have I forgotten anything?; The worried look;:This is going to cost too much; The harassed look: Did the maid remember to take little Ambrosia out? – These were all supplanted by grim looks of of determination, as knuckles turned white from gripping the cart handles.

Each woman had the gleam of a Commando in her eye. This strange transformation did not change till she was out of the store with her precious cargo of cans.Then you’d hear something like this, “I know this is unpatriotic, but you know, Oswald just adores pickled snails, and what with rationing, well, I just don’t know what he’d do, so I just thought I’d get a few….

I read Daddy parts of your letter, and he thought you were very, very clever.Of course, I think so, But I’m kind of prejudiced.You see, I’m very much in love with you.

Howard called the other night.He kept asking me what was new.So I started to tell, and then he admitted that he knew all about it, and thought it was wonderful.So do I.

Daddy is getting lonesome in there by himself and wants me to come in and talk to him, so I guess I’ll say Good Night, honey.

Happy New Year, darling, and I hope we’ll be able to spend next New Year’s Eve together.

They didn’t spend New Years 43/44 together but Harvey was furloughed back to the States for the holidays that year. Ellen and her father went east to New York, and they were married at Harvey’s parents apartment on January 16, 1944. Harvey had just turned 23, Ellen was 22.

I haven’t figured out yet what I am going to do with all this material… Book? Screenplay? Podcast? Multimedia Internet Extravaganza? Dunno yet.

But I figure there’s a story in there somewhere. Some of you already know how it ends…

Incidentally, the working title “I’ve Heard That Song Before” comes from a popular recording by the Harry James Orchestra that Harvey and Ellen both reference several times in the correspondence. I guess that was “their song.” And it’s a pretty good one…