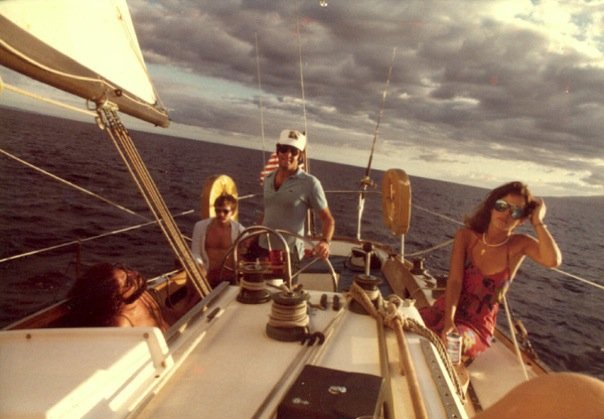 The ground was first tilled in October, 1991.

That’s when my-then-future-ex-wife and I did a vacation exchange – our house on Maui for a home outside of Atlanta, GA. The occasion was our annual ‘Fall Tour’, something we tried to do almost every year by spending a couple of weeks in a deciduous climate, some place where the leaves changed color – which is not something we ever saw when we lived in Los Angeles or Hawaii, the two places where I had been living since graduating from college and leaving the east coast in 1973.

There were a couple of influences already starting to work on me: I’d been listening incessantly to a new Kenny Loggins CD, Leap of Faith (Spotify link), and reading a book by Harry Browne about How I Found Freedom in An Unfree World (Amazon). Those two things already had me thinking a Big Change was coming down the pike.

Once we were exploring around Atlanta, I couldn’t help but notice that the real estate values in that part of the country were nothing like the inflated levels I’d become accustomed to in Los Angeles and Maui. And I was already thinking about what half of the equity in our house in Maui could buy in an area like Northern Georgia, in a region like the mid-south.

Of course my then-future-ex had no idea, but I was thinking about a couple of bedrooms and a fireplace…some grass and some trees to call my own…

Hence the notion that the earth was turned, the fields furrowed in the fall of 1991. All that was needed now was the seed…

By then I was the midst of a transitional period, withdrawing in fits and starts from my life in Hawaii, which by then had been my permanent address for more than a decade. For the previous nearly two years I’d been living in Los Angeles again; I had gone back there in January 1992 – in a move that came very much in the wake of the inspiration of that’Fall Tour in Atlanta.

I’d been sober about 5 years by that time. And as I say now, I was “thinking about giving reality another try” – but was only willing to conceded to reality to the extent that it entailed playing my guitar. I’d been aware for a couple of years of some vocational music programs in Los Angeles: The Dick Grove School of music – where I had taken some elementary classes while I was living in LA in the 70s – and the Musician’s Institute, aka “GIT” or “The Guitar Institute of Technology.”

I’d given a lot of thought to maybe enrolling in one of those full-time programs – and what that would mean in terms of getting off the island, and living again in Los Angeles for a year.

At the time,I was still earning a bit of residual income from the sale of my yacht charter business a few years earlier, and that cash flow represented a window of opportunity that would be closing in another year. If was going to do such a rash thing as spend a year in LA studying music, ’92 was going to have to be the year.

So just a few months after that fateful Fall Tour, I shipped my car (a 1988 Acura Legend – the only car I have ever owned brand-new) on a freighter back to Los Angeles, and in January ’92 – at age 41 – I became the oldest student among many younger classmates at the Dick Grove School of Music.

Long story shortened: Unbeknownst to me at the time, the Grove School was foundering on financial shoals, and actually went bankrupt and out of business midway through my first semester. Fortunately, the State of California had a tuition recovery program, through which my enrollment was transferred to the other school I’d previously considered, the Guitar Institute. Come the following summer I was the old, balding folkie among a retinue of shaggy metal heads, me with my Gibson acoustic amid all the Paul Reed Smith electric shredders.

Can’t you just see me among this crowd?

My mother always thought I would go to M.I.T. You can imagine her surprise when I wound up at the G.I.T. instead…

A lot happened while I was in LA, much of which contributed to the deterioration (destruction?) of my marriage, which was, truth be told, probably the underlying reason why I went to LA/Music School when I did. So, when the year at Grove/GIT was up and I was awarded my degree or certificate or whatever that was, I decided to stay in Los Angeles.

Two other factors were working in the back-and-fore grounds:

First, the period we’re talking about – early 90s – was (essentially) the Garth Brooks era in Country Music, the period when the genre enjoyed what was arguably the zenith of its popularity. I think I was actually listening to some country music at the time… I do know that I was frequenting a country dance club in West LA, where I’d met the woman who I was fooling around with at the time. Yes, I owned boots, and a hat, and shirts with snaps, and I learned to two-step and line dance. She and I took dance classes together, and, yes, I knew how to Boot Scoot. No, thank god, I do not have any pictures…

This was also the period that is now recalled with some wistful nostalgia as country music’s “Credibility Scare.” Artists like Garth Brooks, Kathy Mattea, Suzy Bogguss, Hal Ketchum, Stever Wariner and host of others were making contemporary records that were a far cry from the “lost my dog, lost my girl, lost my truck” cliches most commonly associated with the genre.

And, perhaps more important for my own sensibilities, almost all of what I heard of country music in those days was (and largely still is) acoustic-guitar based.

All of which is mentioned only to convey that the commercial country music of that era was part of my universe at the time (to which I quickly add: I can hardly stand to listen to it at all now).

The other factor was an ongoing friendship with one of the instructors I’d met at GIT, a vocal coach, songwriting, and music business teacher named Jerome Stocco. Jerome and I were fairly close in age, and he also had some affinity for the country music of the day.

And in that moment, the seed was planted in the furrowed soil that had been turned two years early when my (now soon to be ex–) wife and I spent our Fall Tour in Atlanta.

Then my mother – who was 72 at the time – announced that she was going to be re-married (to her second husband’s former college roommate, no less), in Bethesda, Maryland just before Christmas. She offered to send me airfare so that I could attend the wedding, and I finagled the itinerary so that I could spend a few days in Nashville on the way back, just to see what the place was really like.

Yeah, this was my office.

In December ’93, I flew to Maryland, went to the wedding, and then flew home through Nashville. I spent three cold, dreary, rainy days here, but something about the environment resonated with me. It was just the right size and spread for a city – the kind of place I figured I could live in. The sailing, snorkeling, and surfing were not much compared to Maui, which was still my “permanent” address even though I’d been living in Los Angeles for two years. But Nashville just felt like a place where I could live.

I’d never cared for the intensity and pace of New York. When I graduated from college in 1973 and thought about seeking a career in television, I’d figured my choices boiled down to either living in New York or commuting into the city – so I moved to Los Angeles instead. Los Angeles offered a much more hospitable climate (except for that part where the hills catch fire every summer…), but even then the traffic was pretty ridiculous, and I was never really comfortable with the artifice of “the industry.”

I’d left all that to go sailing in Hawaii in 1980. But once the drugs and alcohol had worn off, the appeal of the living “on a rock” in the middle of the Pacific likewise began to fade.

I don’t really remember much about what I did while I was in Nashville for those few days, other than having lunch with John Knowles, who I’d met several summers earlier at a guitar workshop in Connecticut.

This much I do remember quite vividly: When the 737 left the ground in Nashville, I looked out the window and saw that I was immediately surrounded by rolling green countryside as far as the eye could see. Two hours later, as the plane began to descend into Los Angeles, everything started turning brown. I think that in that moment, the decision was made…

Still, I was determined not to do what in “the program” is often referred to as “a geographic.” That’s when you pack your bags in one place and fly off to a new location, expecting everything in your life will change when you get there. Then you get to your new destination, and you unpack your bags and…. lo and behold, its the same old shit. So I went back to LA and undertook a three week project so that I would have plenty of time to contemplate what I was going to do if indeed I relocated to Nashville.

Or, as I like to tell people now, “I went back to Los Angeles and waited for a sign from God…”

Which arrived at 4:27 AM on the morning of January 17, 1994, when God himself shook the very foundations of the building where I sleeping and said in no uncertain terms: st-a-a-a-a-a-a-rt pa-a-a-a-a-a-acking. I remember lying there as my bed pitched through the terrified night thinking, “that’s great… you didn’t live here for more than ten years but you managed to be back for the big one… “

As a friend once observed, ‘Paul responds to acts of nature. He was in an earthquake in California and it moved him all the way to Tennessee.”

Three weeks later I steered my red Acura east and took a week to follow the sequential Interstates – 10, 20, 30 and 40 – through El Paso, Dallas, Little Rock and Memphis.

On February 14, 1994, I arrived in Nashville – to see if there was anything I could do in the music business.