Nashville Scene Cover Story & Photos:
My Weekend At The Races 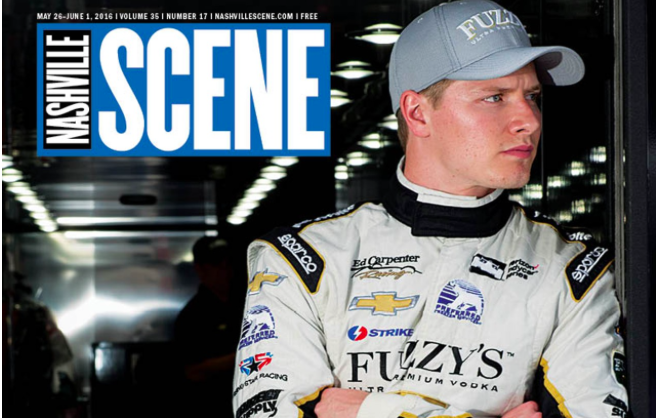 A few weeks ago I reported that I’d spent several days at the Barber Motorsports Park near Birmingham, Alabama with my friend Craig Havighurst, who was working on a feature story for the Nashville Scene about Josef Newgarden – a Nashville-area native who is rising rapidly through the ranks of Indy-type race car drivers. Craig had invited me along for the weekend of the Grand Prix of Alabama provide the photo coverage for his story.

I can finally share the article, which was released today to coincide with this coming Sunday’s 100th running of the Indianapolis 500. When the race starts, Josef will be in the front row, having qualified just a few hundreds of a second behind the pole-sitter.

Even if you have negligible interest in auto-racing, Craig’s article is entirely worth reading. His eye for detail and ability to convey his enthusiasm for this muscular merger of men and machines comes through in a finally crafted narrative. For example:

In race trim, Newgarden’s car, No. 21, sports a handsome white-and-gold livery, but on this day of preparation, its carbon-fiber skin and elaborate wing structures are resting as detached parts on bespoke racks. Revealed are the hoses and wires of the car’s respiratory, circulatory and nervous systems, clinging vine-like to a turbocharged V6 engine. With its tires off, the car looks like a robot insect sent through a wormhole to menace humanity.

Would that I could show you some of the photos of what he’s described here but alas: some frames I shot of the inner workings of Josef’s car had to be deleted from my memory card, lest they inadvertently reveal some trade secrets to the competition.

What I can do is share this slideshow of all the photos that I submitted to the Nashville Scene, not all of which appear in the article.

This was a long but very exciting four days, and now that the final result is in print (gotta by five copies for my mother…) it’s great to see how well it all turned out.

It was a real privilege to work on this with Craig. Thanks, Buddy.