#TMITM #6 : Dueling Elephants Foretell
The Demise of the Two-Party System 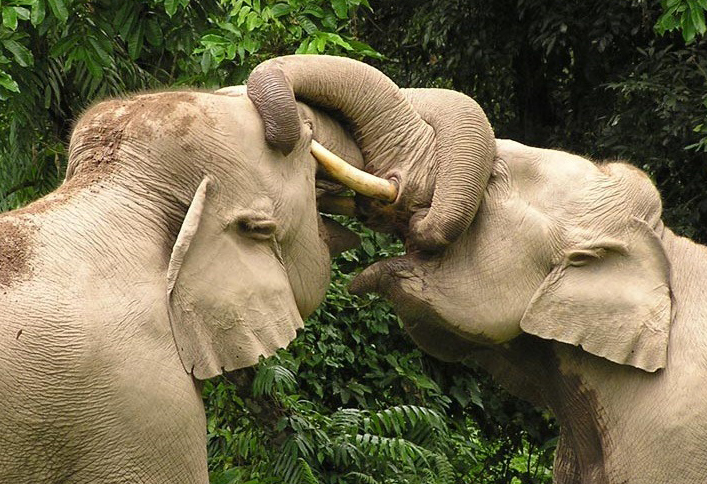 #TMITM, for those of you who haven’t caught on yet, is the acronym for “The Medium Is The Message.”

One of my primary theses over the past several years has been that the advent of the Internet foretells the demise of the two-party duopoly.

For starters, remember: there is nothing constitutionally sacred about a two-party system. It is just the effluent of political convenience that has evolved and persisted since the emergence of the Federalist (for the Constitution) and the Anti-Federalists (for the Articles of Confederation) in the 1780s.

For different reasons, both print and electronic broadcasting reinforced the dominance of two political parties for 200+ years. But the Internet reverses all the primary forces of nature imposed by those media. It is not your father’s media environment any more. Nor your grandfather’s. Nor his grandfather’s…

Print and broadcasting are organized around single points-of-origin and multiple points-of-reception; for every transmitter there are countless receivers. The Internet introduces parity between origin and reception. In the digital era every receiver is also a transmitter. This parity gives ultimately an engenders an infinite number channels through which previously “fringe” perspectives can gain considerable traction.

We have seen countless manifestations of this trend over the past 15 years. We could argue that it first appeared with Howard Dean’s Internet-driven campaign in 2004 and rose to a level of dominance with Obama’s digital organization in 2008. Here in 2016, Bernie Sanders’ $27-a-pop campaign came within a few hundred pledged delegates of toppling the whole house of cards.

I contend that what we are now witnessing is the inevitable fracturing of political discourse that is empowered by an infinite number of communication channels. The Medium is The Message.

It comes as no surprise then to see Thomas Friedman – a major proponent of the mainstream media – advocating the formation of a new political party to counter the unhinged lunacy of today’s Republican Party:

I know so many thoughtful conservatives who know it matters. One of them has got to start the N.R.P. — New Republican Party — a center-right party liberated from all the Trump birthers, the Sarah Palins, the Grover Norquists, the Sean Hannitys, the Rush Limbaughs, the gun lobby, the oil lobby and every other narrow-interest group, a party that redefines a principled conservatism. Raise your money for it on the internet. If Bernie Sanders can, you can.

Notice how the decentralized, distributed power of the Internet lies at the very heart of that argument.

In the splintering of the Republican Party, I suspect we will unleash the even greater likelihood for a multi-party system of governance by fluid coalitions – all made possible by the myriad and largely unexplored functions of digital communications.

Be careful what you wish for, Tom Friedman.