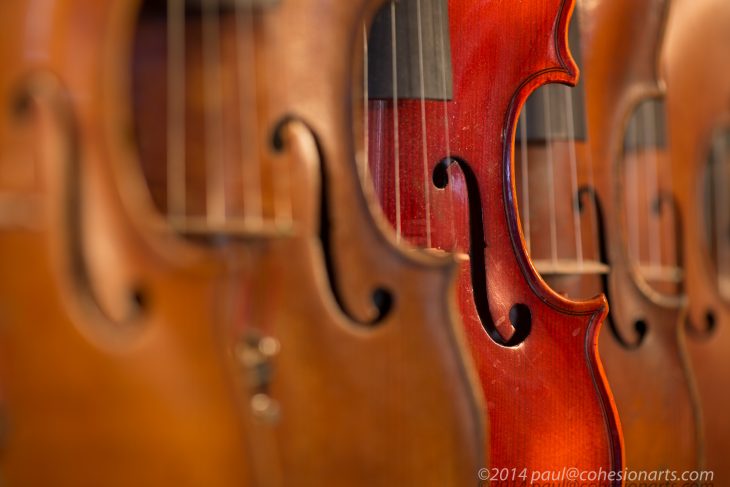 I thought of this one yesterday after posting that Instagram snapshot of the violin headstocks at NAMM.

This goes back to 2013, when I’d just gotten my first “full frame” DSLR, the Nikon D600, and was looking for things to do with it.

Ann and I had been to a show at a small music store in in the Five Points neighborhood of East Nashville called The Fiddle House (t’s not there any more, it has since merged with the Violin Shop on Franklin Pike). While we were there, I looked up at a display of violins (just what is the difference between a fiddle and a violin, anyway?) hanging on the wall and noticed this one red-toned instrument standing out amid all the brown ones.

I got permission from the owners of the shop to come back and set up a shot that featured that one red violin. I brought a strobe with me and tried to light the thing, but all I got was glare reflecting off the varnish. I finally had to put away the flash and resort to the room lighting, with a slightly higher ISO and a MUCH longer exposure. Thank god I brought my tripod.

One more note about that Nikon D600: that was my last Nikon. It was awful. The worst designed and engineered camera I owned in nearly 40 years of using Nikons. I bought it for the trip I took to the UK in the spring of 2013 (oh, how I wish I was back there now for those endless sunsets around the Solstice!) I also carried the little Olympus camera that I’d taken when Ann and I went to Scotland in 2012; that was my ‘back up camera’ for that trip. But I discovered that I kept going to the Olympus when I got tired of lugging the Nikon around.

It wasn’t just the size and weight of the Nikon that wore me down (I got to calling it “the Anvil 600”), but there were other aspects of the camera that were problematic – not the least that I’d gotten one of the models that was so poorly manufactured that the shutter sprayed crud on the sensor, and some of my favorite shots with a deep depth of field (like f/16-22) were nearly ruined by the spots in the images.

It was not long after I returned from that trip that Olympus announced it’s Pro-line of OM-D bodies and lenses, and that’s all I’ve been shooting every since.

Not that anybody asked…