How To Shooting Star 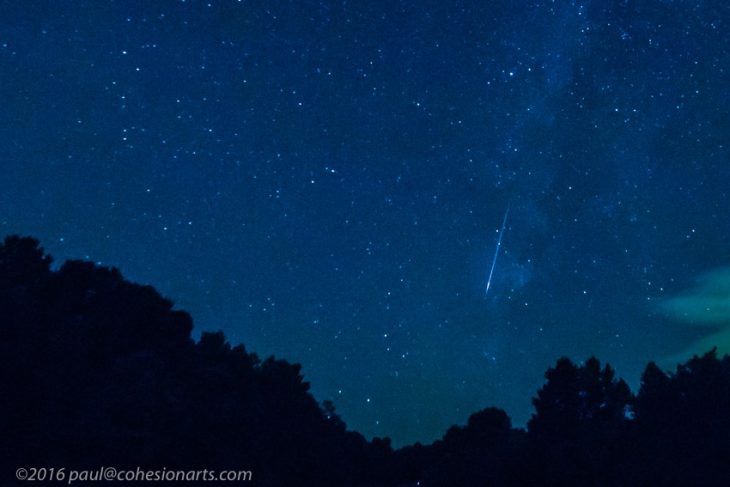 As I mentioned yesterday on Facebook, I’ve been chasing the Perseid Meteor Shower since 1973.

That was the summer I drove across the country, after getting a diploma (I would use the term ‘graduated,’ but only loosely…) from Antioch College (I’d attended made-up classes at a branch campus in Columbia, MD. Remember, 1973 was still the 60s…).

I’d thrown a few things into the back of my 1966 VW Squareback (affectionately named “Duck” and sporting a Daffy Duck decal on the front fenders) and headed off to seek my fortune in Hollywood. I’d done some “guerrilla video” in college and figured it was time to see how real TeeVee was made, so off I went, taking three weeks to get from the east coast to the west.

Along the way I stopped at the Vagabond Ranch outside of Granby, Colorado, at the edge of the Rocky Mountain National Park. I’d spent two summers there when I was 14 and 15 years old. Those might have been the best summers of my life. Vagabond wasn’t a “dude” ranch, but it was run as a Western-themed summer camp by a couple from Connecticut, Charlie and Ronnie Pavek.

Not very many people nowadays remember “Spin & Marty” – a short movie series that Walt Disney ran as part of “The Mickey Mouse Club” in the 50s; It was about a city kid (Marty) who got sent to a western ranch where he got to ride horses and friend up with a cowboy kid named “Spin.” That’s about as much as I remember about the series, but it was always my frame of reference; I still tell people that I spent two summers in the mountains of Colorado, “acting out my ‘Spin & Marty’ fantasies.

For the four summers before Vagabond, my parents sent me for two months at a time to a ‘sleep over’ camp in Maine called Kennebec – a sports driven, competitive environment inhabited mostly by affluent Jewish kids from the Northeast. That’s where I spent the summer of 1962 being tormented by an 11-year-old monster named Jeffrey Katzenberg (the name might be familiar?). But that’s a story for another time.

I never exactly excelled at sports; I could hold my own at tennis and I was an OK sailor, but the first time another kid threw a hardball at my head (he wasn’t aiming at me, he was just 11 years old and it’s not like he had any control…) I knew I was never gonna be a baseball player.

Basically, sports suck when you suck at sports.

Vagabond was the exact opposite of Kennebec. There were almost NO sports. Instead, I spent the summers mostly riding horses in the mountains. Unlike Camp Kennebec, I have nothing but fond memories of Vagabond Ranch. I even recall with some distant fondness the night I spent shivering under a tarp in the rain at 11,000 feet; and my favorite horse, a red mare named “Strawberry.” She could be tough to catch in the coral, but once saddled Strawberry was a soft and responsive ride.

So that summer of 1973, I made my way across the country, alone in my little VW – Niagara Falls, the The Great Northern Plains, The Badlands, The Black Hills, The Crazy Horse Monument – I stopped at the Vagabond Ranch and said hello to the Pavek’s.

I must have gotten there the night of August 11 –because that night all the campers were taken out to a meadow to lie on their sleeping bags and watch the Perseid Meteor Shower. I’d never heard of the Perseids before that. But once I saw them – probably 2 or 3 shooting stars every minute – I was hooked. I’ve tried to see the Perseids almost every year since.

The flyer my then-future-ex-wife Georja Skinner made for the Perseids cruise we ran in August of 1982.

Probably the best I ever saw the Perseids was from a few miles off shore from Lahaina, Maui, in the summers of between 1981 and 1992.

From Lahaina, you start out 70-some nautical miles from Honolulu, the nearest big city; once you get a few miles offshore there’s little impact from the lights of Maui. The sky is ink black and there are stars by the bazillions. The years we went out on the boat, we probably did see 60-100 shooting stars every hour (but not every minute!)

In the summer of 1999, I went back to Vagabond Ranch with my then-future-and-still-second-wife Ann. The Ranch was no longer owned by the Pavek’s (who were no longer living) but was owned the family of Richard Kelly, the owners of – how’s this for irony?– a large hotel chain in Hawaii. Since the Kellys only visited the Ranch occasionally, the caretakers of the property, Mark and Jane Bujanovich, welcomed us to stay a few nights and we watched the Perseids with them. I’d forgotten how cold even a mid-August night can get at 8,000 feet…

It has been harder to see the Perseids since I’ve been living in Nashville, but almost every year when there’s been a waning or new moon, we’ve tried. Last year we went out to Bell’s Bend. This year I went out to the Natchez Trace and set up my camera with my photo-buddy Ken Gray.

So this is how you shoot a shooting star: you drive as far away from the city as possible. The Natchez Trace Parkway outside of Franklin, TN is only one order of magnitude-of-light-polution less than Nashville and its environs, but it’s a decent night sky.

You start at about 11 PM. You set your camera on a tripod with a remote control shutter release. You aim the camera at a dark corner of the sky with the widest-angle lens in your bag (in my case a 14mm equivalent) to cover as much of the sky as possible, and set the shutter to open for 15-30 seconds with the aperture wide open at a fairly high ISO, like 1600. The 15-30 seconds is long enough to get an exposure from the star field, and you hope that the high-ISO is enough to capture the fleeting light of a hot grain of cosmic dust as it streaks across the frame.

After that, it’s entirely random. So you open a folding camp chair, sit down, and just start releasing the shutter, over and over again, until something streaks across the sky while the shutter is open,

And then you apply the one tool that you will not find in any camera bag: abundant patience. A little luck helps, too.

This was yet another year when the coming of the Perseids was touted as going to be the most dazzling display in memory. That’s what they say every year. But every year… enh. Not so much.

I exposed frame after frame after frame, but for more than two hours, nothing happened in the frame. Once exposed, the camera takes as long to save the file as the shutter was open – 15 or 30 seconds. Several times, that’s when something blazed across the frame. But for as long as I was out there, it was less like 2 or 3 every minute and more like 1 every two or three minutes.

As 2:AM approached… I finally got one. After that, it’s like fishing. You get one… you want another. It did seem like the activity was picking up a little, an so I kept releasing the shutter. Slightly after 2AM, I got one more, a little better than the first. That’s the one at the top of the post.

And then I drove home.

So that’s how you shoot a shooting star. You go out in the wee hours of the morning. And you wait. And then you wait some more. And when you’re finally ready to give up… you get one.

Forty-plus years I’ve been chasing the Perseids. That’s the first I ever got a picture of one.

But regardless of the actual number, every Perseid Meteor or see is filled with the memories of a lifetime of shooting stars.