Playing The Hand We’ve Been Dealt 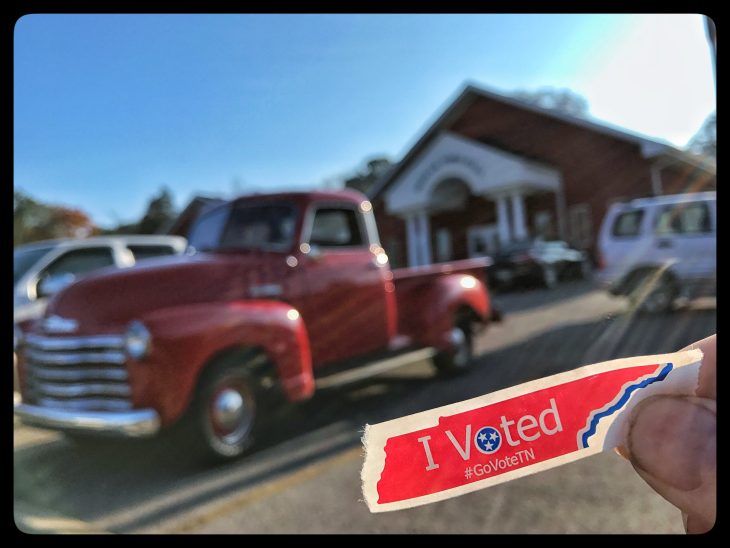 I’ll finish my second cup of coffee
then toast a bagel
so that I’m not hungry
when I fire up
the old red truck
(which rolled off the assembly line
while Harry Truman was President)
and head down
to Pegram City Hall
to vote.

Despite all my reservations
despite my concerns
that the a vote for Her
is a vote for Corporate Oligarchy
is a vote for a status quo
that is clearly not serving
some significant portion of the populace
– white, rural (my peeps!)
– urban under-educated (we love the under-educated!)
those “salt of the earth” types
for whom Donald-fucking-Trump
seems like a viable alternative
when what he really represents
is …
(was it Michael Moore who said this?)
… a Molotov Cocktail
that the proles can throw
into the Palace of the Establishment.

As in:
Here, take THIS
you game-rigging
East Coast
Ivy Leaguers.
Suck on this
flaming bottle of rage.
#Her2016?
#Guillotines2020.

But when it comes down to
actually pulling a lever
as much as I would like to
#CrushTheDuopoly
it ain’t gonna happen.
At least, not this year.

This year, we have to
hold our nose
swallow our idealistic pride
just do what we can
to keep (what’s left of?)
a once bold experiment
together.

Or do what Bernie says we should do.
Or as Andrew Sullivan said
just grow-the-fuck-up
and do what has to be done.

It’s unfortunate for Hillary, I guess
that the climate around her ascension
is so toxic.

It’s unfortunate, too,
that her life and career
have unfolded as they have
although had it been any different,

had she not entered the public arena
at the side of her charismatic husband
[compelling human interest story in the NYTimes this morning]
and then she had to pretty much stand by
while he self destructed
and then saddle herself
with all of that wreckage.

So you wonder
what it might have been like
if she’d emerged through some corridor
other than as Bill’s spouse
but that’s pointless speculation.

We’re all here to play
the hand that we’ve been dealt.

Sure, she’s got a lot of baggage
Who has lived on this planet
for nearly seven decades
and not accumulated
their share of shit?

But underneath it all
one occasionally gets a glimpse
of a genuinely exceptional
if equally flawed
flesh blood and bone
woman.

It’s hard to separate
the actual person
from all the mediated data points.
Who really knows
what she is really like?
I mean, who,
outside of her tight inner circle
if even them?

We’re certainly not going to get
any sense of that
from television, or – especially – the Internet
– that digital echo chamber
that does such a great job
of re-telling us what we already know.

We just have to play
the hand we’ve been dealt
and take some solace
in knowing that voices we respect
like Bernie
like Andrew
like Elizabeth Warren
are all in the same boat.

So I will dip my oar
in the swirling ocean of crazy
pull my solitary stroke
in Her direction,
hope she can steer us
to some shore of (relative) sanity,
and then pray that the polls
are reasonably accurate.