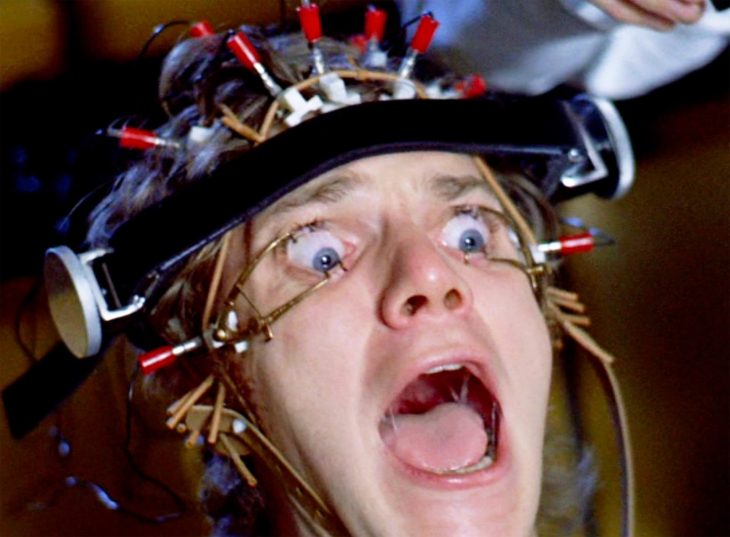 I have been trying for some time now to surmise why just the fact of the Internet / Digital Media / Facebook is making us individually and collectively nutz.

We’re kinda like that scene in “A Clockwork Orange” – the one where Malcolm McDowell’s eyes are held open with calipers and he’s forced to watch something on a movie screen that is supposed to “reeducate” him .

And so it seems we have become with Facebook: Our eyes are forced open, but we’re forcing them open ourselves. And we scroll and stare and stare and scroll, and then post and comment and reply – all under the delusion that millions, or thousands, or maybe even dozens, are seeing what we post. When it’s probably the same five or six or a dozen people…

Repeat after me: I am powerless over Facebook, and my life has become unmanageable.

At the very least, as I have been saying for some time now, I feel about Facebook the way I felt about scotch and vodka in the months before I finally quite drinking (late November, 1987).

The trouble with recovery from Facebook/Internet addiction is that is much more like an eating disorder than alcoholism. The antidote for alcoholism is (relatively speaking) pretty simple: you quit drinking. Once the “cure” kicks in, you don’t need alcohol or drugs to navigate through the vagaries of life. But you do need food. So while you don’t have to drink, you do need to eat.

One of the precepts of the 12-step program of Alcoholics Anonymous (with which I an quite familiar, nearing 30 years of sobriety around Thanksgiving 2017) is that “half measures availed us nothing.” Meaning: If we’ve got the gene for addiction, then trying to manage our intake is going to be an exercise in futility. Sooner or later we’re going to lose the ability to “moderate” and drive when we really shouldn’t ought to. Or wake up in a gutter. Or just cut to the chase and not wake up at all.

An eating disorder is different, because that has to be managed in a way that alcoholism cannot be managed. You could starve yourself, I suppose, but that would just produce the same result as drinking yourself to death.

And so it appears to be with Facebook. And I don’t mean “websites like Facebook.” Facebook is it’s own unique, globe-encompassing, time-sucking phenomenon. You can try to avoid it, but at best you’re ultimately going to have to manage it. Otherwise, you may as well be… well… dead.

2,000 years of “civilization” and it’s still hard to find a pedestal table in a coffee shop that doesn’t wobble.

Now we learn that one of the most prominent and successful movie producers of all time turns out to be a lecherous old man. And we are surprised because…? Oh. That’s right. We’re not surprised.

There is quite possibly nothing uglier than a pretty girl smoking a cigarette. Or rolling her jaws around with chewing gum. A ring in the nose – the kind that hangs down between the nostrils – is a close second. Sorry, my millennial fans. I guess this is just coming from a lecherous old man.

Jason Isbell is headlining six hard-to-get-tickets-for nights at the Ryman Auditorium in Nashville next week.

Fortunately, I’ve got tickets for Monday night. Unfortunately, they’re downstairs, under the ‘lid’ of “The Confederate Gallery” (I never get tired of saying that) but at least they’re “in the arena.” I much prefer the upper deck, but like I say, getting any tickets at all for these shows was a daunting task. And did I mention, “Fuck you, Ticketmaster. And the “verified fan” gimmick you rode in on.

Anyway, in anticipation of the six-night-stand, The Nashville scene has created an article “Considering Jason Isbell’s Best Songs: A critical look at 10 key tracks from the artist’s solo albums before his six-night Ryman run.”

Each of the listed tracks is accompanied by a YouTube video, which is nice, but I can never understand how somebody can go to all that effort and not bother to put together an actual playlist. So that, you know, you can hear all the tracks sequentially. One after the other. Without having to stop and click after every track.

So I went in and created a Spotify Playlist for y’all. Jason Isbell’s “10 best songs” plus one I also like a lot (“24 Frames”).

So, those are the random thoughts that I might have posted to Facebook if I hadn’t quarantined myself at the start of the week.

I rather like gathering my thoughts through the day and posting them here, all at once – rather than ‘scattering my seed’ all day long with posts and comments and replies – and then “lobbing them over the wall” via the plugin that sends my posts from here to Facebookistan.

That seems somehow consistent with the ‘can’t drink, but gotta eat’ theory.

If you actually followed the link, thanks for stopping by. If you care to add anything too the above, please use the comments here. Let me know if you have any trouble with that.

Have a swell weekend.