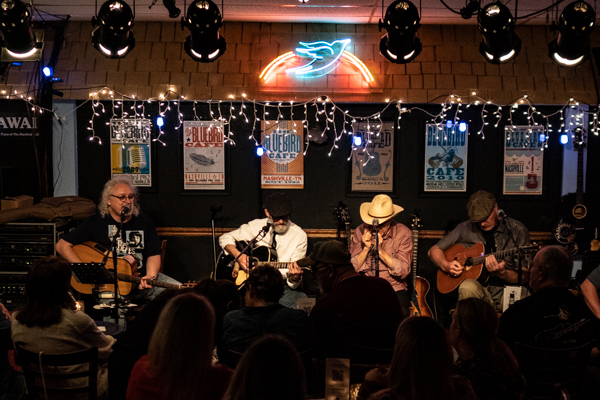 Under the Neon Bluebird: On the left, Don Henry;
hiding under hats L-R: Tom Kimmel, Dana Cooper and Michael Lille

The Bluebird Cafe figured pretty prominently in my early days/years in Nashville.  I went there a lot.  I don’t go there as much as I used to.  Since the venue was a featured location in the TeeVee show Nashville for several seasons, it is near the top of most visitors’ ‘must see/do’ list when they come to Music City – which means reservations are very hard to come by unless you jump on the website within minutes of tickets going on sale.

It’s kinda like Yogi Berra once said of a popular club in New York,

Nobody goes there any more – it’s too crowded.

I don’t monitor the Bluebird schedule like I used to, and if Dana Cooper hadn’t called me and let me know this show was happening, I would have been kicking myself if I heard about it after the fact.

Because all of these guys – especially Michael Lille and Tom Kimmel – played a pivotal role in those early years.

I think I first heard Michael Lille at the Commodore Club on West End in 1994.  The first thing I noticed about Michael was his approach to the guitar, it had a very ‘Michael Hedges/New Age’ quality to it – very unlike the shredding metal sound I heard from most plugged-in acoustic guitars (I still hate that sound).   Then he performed a song called ‘Life On the Run’. The song describes a trip Michael took to Indonesia, and waking up to the sound of “laughing children at the edge of the sea” – and contrasts that to his (our) lives in Western what–we–call ‘Civilization.’   I’ll put the only recording of the song in a playlist below, here’s the chorus:

To this day I cite that as the moment I realized that there was more to Nashville than the popular perception (think Hee Haw) that most people outside the 440 beltway have of the city – that there is a deep well of talent that flourishes just beneath the thin crust of mainstream country music business.  That was one of the two primary motivations at work when I started to ask the people I was meeting ‘what would you think if I tried to sell some of your CDs on the Internet?’ This was 1995, so a common answer was ‘what’s the Internet?’

Similarly, I met Tom Kimmel at the Bluebird,  in roughly the same time frame that I met Michael Lille. I was still on a bit of a ‘spiritual’ quest at the time – I had worked ‘A Course in Miracles’ while I was living in Los Angeles before coming to Nashville.  I heard Tom perform a song called Angels.  That chorus also resonated with me:

I was still playing a bit myself in those days, covers mostly. When the show was over, I introduced myself to Tom and asked if he had a recording of Angels that I could learn the song from. Tom said it was not recorded on any of his CDs but kindly offered to send me a cassette and lead sheet and I learned the song from that.

Fast forward to the spring of 1995: Tom was one of the first people I approached with the idea of selling CDs on the Internet.  Unlike most of the people I spoke with, Tom had some idea what I was talking about because he had participated in the “Internet Quartets” – a traveling series of Bluebird-style ‘in the round’ shows promoted by folk-on-the-web pioneer Alan Rowoth.

“That’s a great idea!” Tom said, “I’ve been thinking I need a home page of my own.”  He not only needed a home page, he volunteered to help with the enterprise.  He introduced me to Michael Camp singer/songwriter with some tech experience.  The three of us talked it over, we each pitched in ~$300 to secure some server space and a domain – which turned out to be ‘songs.com‘ – and the rest is history.  Ancient history by now.

Dana Cooper, the Hardest Working Road Warrior in All of Show Business, was one of the first people we signed on to the service.

And Don Henry… well, I started talking to Don in the early days but never quite managed to get him on the site.  I’m glad to see he’s finally got a website.

So, I go waaaaay back with all these guys, and it was just heart warming to hear them all again for one night.

As he was introducing his first song, Tom told a story about the first time he ever played at the Bluebird, “for a room full of little old ladies…”  And I could not restrain myself from blurting out from my seat,

Tom, those old ladies are our age now!

So, yeah: Old Folks Night at The Bluebird .

I had the presence of mind to bring my camera:

And I’ve compiled a playlist of my favorites of their recordings.  Not all of these songs were performed that night, but some of them were.  I have included two tracks from Dana Cooper’s latest CD, I Can Face The Truth – which Dana said that night is his 30th album!  I’ll will have more to say about that one in a future post.