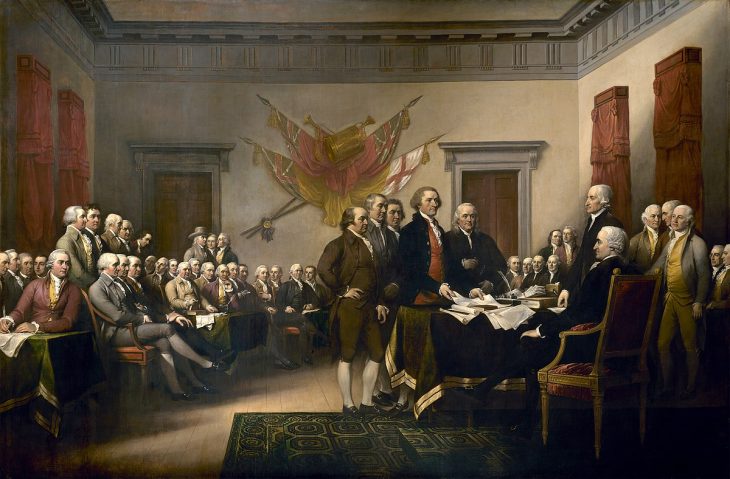 This country is an idea, and one that’s lit the world for two centuries…

I am writing this post mostly because it’s the ‘4th of July Weekend’ and I want to encourage anybody who is reading this to listen to this:

Anybody who has known me very long knows I’m a huge fan of this podcast.  I have listened to almost every episode since I first learned of it more than 20 years ago.

In a typical episode, the creator of the show, Clay Jenkinson, is interviewed as Thomas Jefferson, speaking from a 21st century perspective on both historical and contemporary events and issues; at the end of each hour Clay returns as himself to speak about what he has just said as Jefferson.

This episode is a departure from that format. To discuss Independence Day, Clay speaks with three people.  The first is a listener, Brad Crisler – from Nashville, no less;  second is Lindsay Chervinsky, an accomplished young historian; third is the venerable Joseph Ellis, one of the country’s most renowned authorities on the Early National Period (side note: it was Ellis’s American Sphinx that sparked my interest in Jefferson to begin with).

With Clay and his ‘semi-permanent guest host’ David Swenson, these three individuals offer a useful perspective on why, despite the challenges of any given moment, we shouldn’t give up on the idea that took shape in Philadelphia  two-and-half-centuries ago: that all men (and women!) are created equal, are entitled to equal justice under the law, and can effectively govern themselves through compromise and majority rule.

Murica!  It really is the best idea anybody’s ever come up with for a country – even if its origins are steeped in contradictions, and even as the institutions that were formed to implement those ideas have outlived the compromises that were necessary accommodate those contradictions.

The simple fact of the current moment is that we are no longer ‘majority ruled.’  With the non-proportional representation of the Senate (and its very unconstitutional filibuster rules), the persistence of the antiquated Electoral College, and a Supreme Court super-majority that was appointed by presidents who (mostly) failed to win the popular vote, our political environment has taken a dark turn from the actual will of the majority.

We are a more enlightened people than our current governance wants to let us be.  It has taken 200-plus years, but now our institutions have morphed from declaring our independence from a tyrannical monarch to a tyranny of our own minority.

The irony in our current predicament is that this ruling minority labels itself as ‘conservative.’ In my recollection, the essence of ‘conservative’ was ‘limited government that stayed out of individual lives.’  This newer brand of conservatives is precisely the opposite.  They seem determined to tell the rest of us how to live our lives and what we can do – from who we can love or marry to what goes on inside our own bodies.  Well, excuuuse me, but in truly free state, your right to enforce your religiously-defined values stops at my epidermis, and your capacity to be a fascist stops at yours.

Still, as Joseph Ellis says near the end of his segment, “when we are at or near the solution to the human problem, we would be insane to turn away from it.”

I hope some of you reading this will find the time over this weekend to listen to the podcast offered above.

If Clay Jenkinson and his erudite friends are not enough to restore your optimism, then I also suggest you read this op-ed in today (July 3)’s NYTimes by another Nashvillian, Margaret Renkyl:

The American Flag Belongs to Me, Too,
and This Year I’m Taking It Back

It should not be so unbearably hard for justice to prevail, and justice finally gained should never again be at risk. But this is the country we live in. The fight for freedom will never be over. And, God help me, I will not be one who gives up. This is my country, too, and I will not surrender it to a vocal minority of undemocratic tyrants.

OK, enough with the pontificating.  Let’s go to the ballpark, root-root-root for the home team, gobble hotdogs and blow some shit up: