Let’s Blow Some Shit Up! 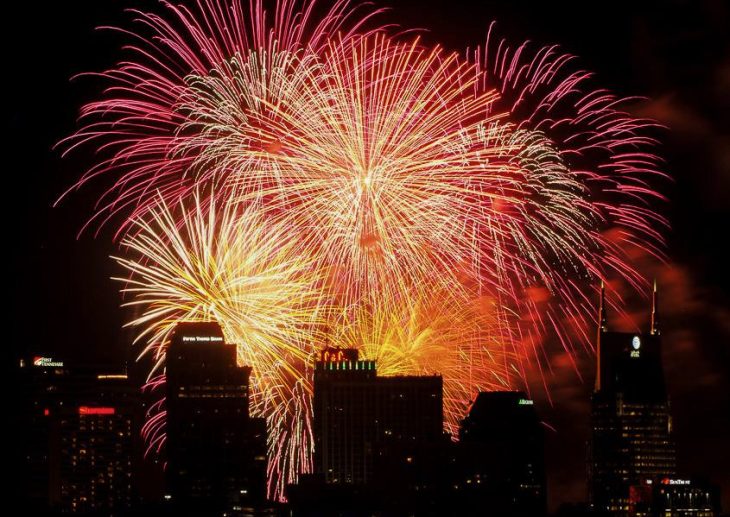 … just as we’ve never gone to see the downtown fireworks – and that’s in the now 20 years since I’ve been living here (and 16 years for Ann, if my math is working).That’s mostly because ever year since 1995, my 4th of July celebrations have revolved around taking a gang of people to Greer Stadium for whatever the Nashville Sounds have going for the holiday.The 4th of July has always been my favorite holiday: First, because it celebrates one of the most remarkable periods in human history – that time in the summer of 1776 when a gang of radical dissidents came up with the best idea for country the world has seen before or since.[/caption]

When I had my boat business in Hawaii in the 1980s, we had three days every year when we shut the operation down and gave everybody in the company the day off: Thanksgiving, Christmas, and the 4th of July. Of those three, the 4th was my favorite because it’s the only one that is strictly secular, no religious overtones.

In fact, I’m such a devotee of 4th of July fireworks that I had to stage my own show one time.

One year while I was living on Maui – I’m guessing it was 1983 – there were NO 4th of July fireworks anywhere on the island. I remember driving around the dark island, trying to find a fireworks display, thinking I was living in some kind of heathen Communist state.

I resolved that was never gonna happen again, and the following year I joined forces with a Hollywood pyrotechnical who lived part-time on the island. He offered up a cache of aerial explosives if I could raise $5K. So I went around the island, raised $5,000 (and encountered only one objection to spending that kind of money to just blow shit up) and Maui has not been without a fireworks show ever since.

OK, maybe I have made a useful contribution to civilization…

Fast forward to Nashville, summer of 1995… that was the year Tom Kimmel, Michael Camp and I started songs.com. So, now that I lived in a town with a decent (if dated) triple-A, minor league ball park, I thought it would be fun to get some of that gang together for “the perfect 4th of July: baseball, hotdogs and fireworks all in one location. It doesn’t hurt that the parking is pretty convenient, too.

That was the start a tradition that’s been going on for 19 years now (with the exception of 2005 when Ann and I went on a scuba trip to Belize the week of the 4th and organized a night at the ballpark later in the month).

We did it again Thursday night, July 3 – since the Sounds were going to be the road time somewhere on the actual 4th, the Independence Day festivities and fireworks were staged the night before.

That left us with not much to do on the actual 4th, so we got tickets for the Belcourt Theater premier of the re-release of The Beatles “A Hard Day’s Night” which was followed by a performance of Beatles songs by Nashville’s own Beatle, Bill Lloyd and his Long Players, renamed for the night “A Clue to An Entirely New Direction” – a name satirically lifted from a line of dialog in the movie.

So that was all we had planned for the 4th of July. But we got out of the theater at about 8:30, and I’d heard that the fireworks downtown were not going off until 9:45 so… hey, we’ve got enough time to find a vantage point and see some more fireworks!

I’d found a couple of potentially viable locations with a good view of downtown while researching my entry in the Mayor’s Skyline Photo contest last fall. One location I found is atop a parking lot in midtown. The post is about 2 miles from the fireworks ground zero in Riverfront Park, but I figured a) that would give us a perspective that included the skyline, and b) we’d be far enough away to have easy ingress and egress.

And when we got there at about 9:15, it turned out we were right on all counts. There were a few dozenl other people in the same place, enough that there was even a security team in place to keep the crowd in line. But parking was easy and the vantage point was terrific. We set up the tripod, mounted the camera, and waited.

And boy, was it worth the effort. Nashville puts on what I have since learned is considered one of the top three 4th of July fireworks displays in the country. There were a lot of ground displays that we could only see the tops of between the buildings, but the aerials were spec-fucking-tacular!

Several times during the almost 30-minutes of pyrotechnics Ann and I said to each other, “OK, that’s it….” and then it would resume and go on for more. Big bang boom!

And it wasn’t just the visuals. Even from two miles away, the sound was pretty amazing, too. The onslaught of explosions was loud and concusive – and a reminder of what fireworks really represent: At one point Ann said, “this is what a war must sound like.” Yup, just another day in Baghdad…

We were in a perfect place to ‘get the shot’ that included all the aerial displays over the city, lit up above a silhouette of the city’s most notable architectural landmarks from the Fifth Third Bank building to the Batman building (which one astute observer said looks like the Eye of Sauron in Mordor…) I’ve culled eight frames from the evening and uploaded ’em here.

So that’s the story. We almost didn’t go, made a last minute course correction, and I got a set of photos that have generated more social media feedback, likes, comments, and shares than anything I’ve shot/posted. Big thanks to everybody who “Like”d and shared on Facebook an Instagram.

I guess people like to see stuff blow up in the sky…Happy Birthday, ‘Murica!