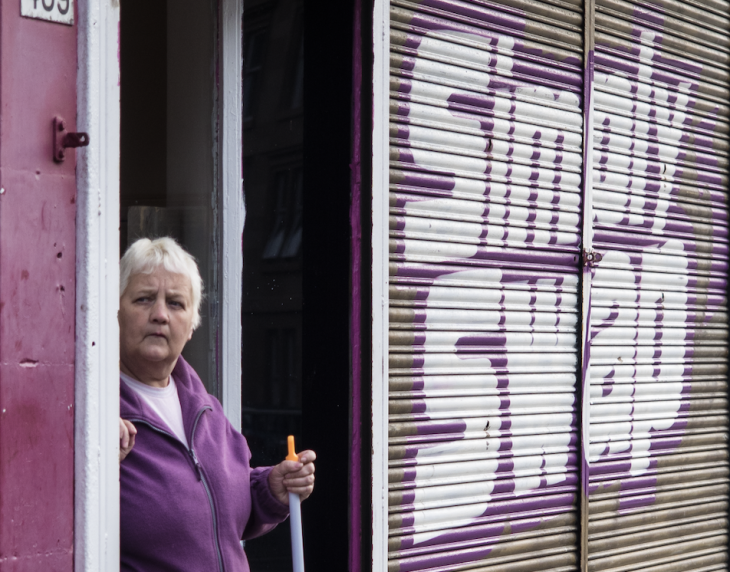 Partly since I have no idea when I’ll ever get back there again, I’ve been going through some of the photos from my last trip to the UK in October, 2014.

I spent the first few days on this trip in Glasgow, mostly because I wanted to see Glasgow Cathedral after learning of its architectural semblance to the Rosslyn Chapel (which was a pivotal factor in this whole quest, for reasons that I’ve outlined elsewhere).

But I didn’t really feel comfortable the whole time I as in Glasgow. I stayed at a nice enough AirBnB not far from the Cathedral, but the city doesn’t have the kind of visual focus that Edinburgh has around its looming castle. I took the open-air, double-decker bus tour, I could see it was a vibrant and creative place, but personally I just never quite connected with it.

Nevertheless, I made a few attempts to capture some of its essence. I put on my “street photographer” hat a few times, and this is one of the results:

Paul Schatzkin
Digest, photography
Add comment
You would have had to be dead or blind to miss the sunset that blanketed Nashville the evening of Wednesday, September 18. It has been raining most of the day, and the storm cleared just as the sun was going down, and the resulting visuals were pretty impressive in whatever direction you looked.
The first thing I saw as I came out of “my Starbucks” in Belle Meade was the very unusual cloud formations to the east. So I ran to the car, got my camera and a wide angle lens and started shooting. Being in a parking lot, I didn’t have a whole lot to work with in the way of foregrounds, so I pretty much just shot the sky.
So here’s what it looked like to the east:

..and this is what it looked like to the west, looking straight into the setting sun:

Autumn at the Faerie Pools

Paul Schatzkin
Digest, photography, travel
Add comment
No, I’m not in Scotland. Didn’t get across the pond this year. <*sigh*>
We have a digital photo frame on the counter in our kitchen, and it plays a continuous rotation of photos from our trip to Scotland in October, 2012.
I saw this one a couple of days ago and it reminded me that fall is mostly faded now. Here’s a glimpse of how the season looked back in that October, at an area on the Isle of Skye called the Faerie Pools:

…with a barn and a tree.

It was also along the Blue Ridge Parkway in Virginia.

So I was just driving along the Blue Ridge Parkway last week, when I saw this little barn… and this big, red, tree…

Sunrise on the Blue Ridge Parkway

I went up to Virginia again last week, this time to visit a guy who is building a nuclear fusion reactor. More on him later.

I stayed in Floyd, Virginia, in the foothills of the Blue Ridge Mountains. The day I headed home, I got up before dawn and headed to the Blue Ridge Parkway, and saw this sunrise from the first overlook:

She is sitting opposite me at the community table @Starbucks in Belle Meade (Nashville). Anna has a MacBook Air and an iPhone – the very same gear I am sitting here with.When I was 15 years old, telephones plugged into the wall and you dialed them. Television was black and white and there were only 3 channels. Radio was mostly AM and just a little FM. Computers were what NASA went to the moon with. That was about the extent of our electronic media environment.
I wonder what 15 year olds will have at their disposal when Anna is 65… For the record, Anna gave me permission to take her picture and post this. I took this picture my iPhone. And she took a picture of the Facebook post on my iPad. With her iPhone.
©2015 [email protected] aka @driver49

Paul Schatzkin
Digest, photography
Add comment
Ann and I spent two nights on the shores of Nickajack Lake near Chattanooga, our annual anniversary weekend excursion.
I swore I was going to stay off line for a few days. I did manage to not open e-mail for the duration, but I couldn’t resist posting this iPhone photo of the sunset as I went out on the dock to grill some bratwursts.
Sunday was the night of the Blood Moon. We didn’t think we were going to see it, because the sky was totally overcast as the moon rose. I fell asleep reading in bed, and when I woke up at around 10PM I thought to stick my head outside and, sure enough, a hole had opened in the clouds and we saw a few minutes of the red moon, and then the waxing eclipse.
Sometimes it’s better to just watch a thing than try to photograph it…

Sunset over Nickajack Lake, near Chattanooga, TN. #No #BloodMoon #toomanyclouds

The Great Failing of Restaurants Everywhere

Is there anything more annoying than ketchup that is served in these tiny little packets.

We had dinner Saturday night (before going to see Arlo Guthrie at City Winery for the ‘Alice’s Restaurant 50th Anniversary Tour’) at a nice little barbecue joint called “Slow and Low Barbecue Bistro.” The food was great. There were bottles of bbq sauce that we could squirt into little compotes for dipping. Why couldn’t do the same for ketchup is a mystery.

Instead, we had to tear open a half dozen of these little packets. Always a pain the ass. C’mon people, but the ketchup in a bottle, too.

The great failing of restaurants everywhere