Wisdom From A Typewriter #67 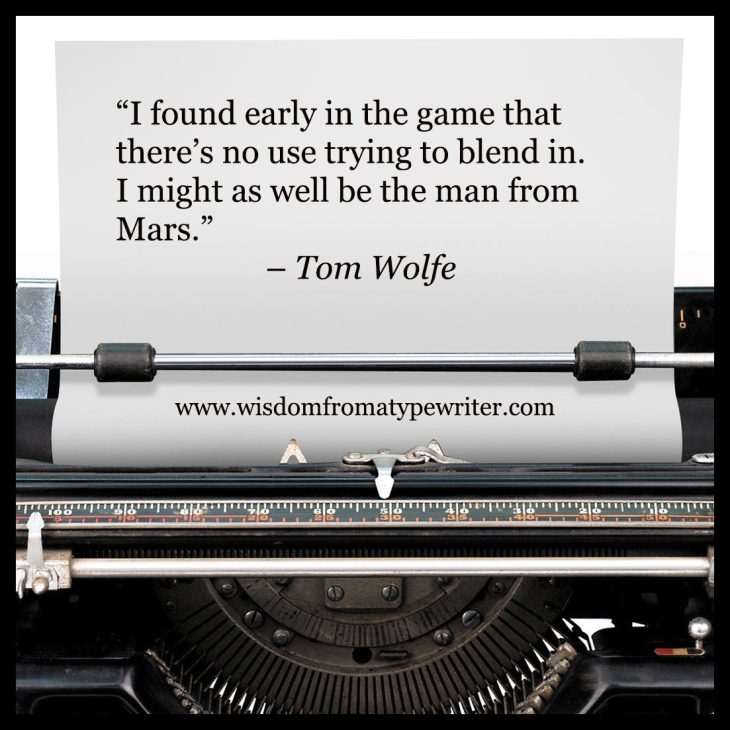 Just something I heard on a podcast recently.

I guess Tom Wolfe was ‘incorrigible,’ too. 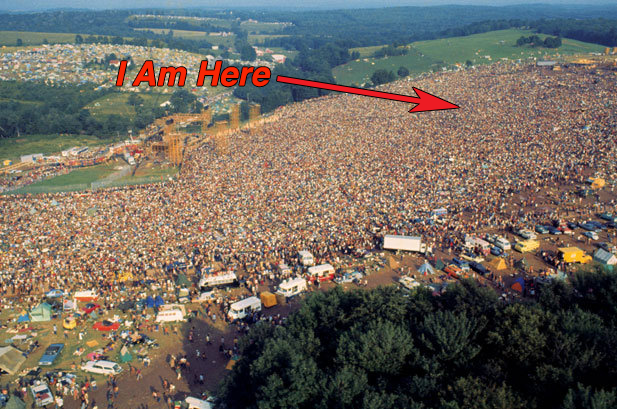 As long as everybody else is reminiscing about Woodstock….

Was it really fifty years ago today?? Am I really that old??

And I have survived – somehow, and despite my valiant efforts to the contrary.

The other good news is that my faculties are still (largely?) intact.

OK, I don’t exactly have photographic memory of everything that happened in 1969 – that is, after all, the year that the drugs kicked in, and I basically stayed stoned for the next two decades – but I made notes!

For almost all of 1969 and ’70, I kept a journal, and in that journal are the notes I recorded immediately after returning from Woodstock, which are compiled into three installments posted to Medium.com:

Whatever Happened to The Age of Aquarius?

There is also a somewhat abridged, 10-minute podcast edition of the story that you can listen to directly here:

… or download into the Podcast app on your gizmo here. 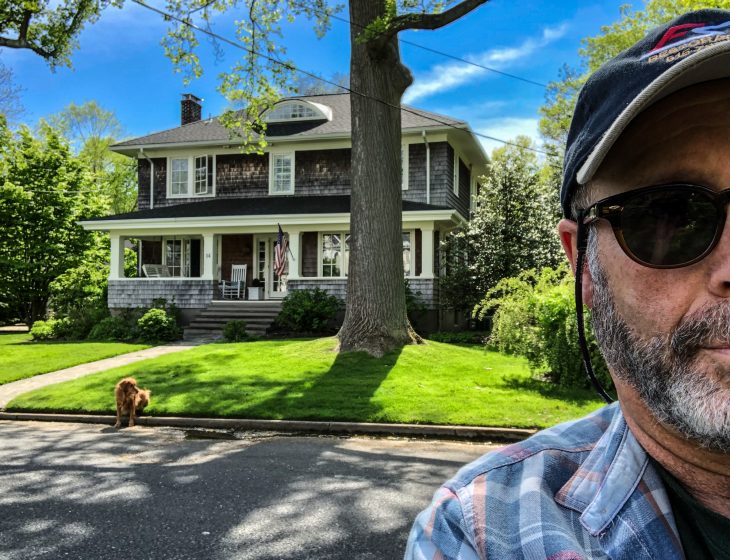 I went back to Rumson for a few hours last week….

Over the decades since, I’ve gone back there several times.In the fall of 1984 I went back for two whole weeks.I owned a house in Hawaii at the time, and could have arranged a ‘vacation home exchange’ anywhere in the world. I could have gone to England or France; I chose instead to spend two weeks in New Jersey.But even that was not enough to heal the psychic wounds inflicted by the way I’d left 22 years earlier.

Prior to this most recent visit, the last time I was there was in 2002, when my sister and my brother and his wife and a couple of their kids and I granted our mother’s final wish and spread her ashes around the town where she’d spent the happiest years of her life – before our father’s untimely demise in 1958.

Today I am publishing a pair of companion pieces that explore my departure from Rumson in 1962 – and why I keep going back:

The Summer of ’62 is about the move.It’s a piece that I wrote as part of a memoir writing class I took in March of this year.

Return to Brigadoon is about one of those return visits in the summer of 1969; it’s based on a poem I found when I re-opened the journals I kept during my last year of high school and first year in college.

I’m posting these now as part of an attempt to find meaningful closure around some of what my new therapist calls “early childhood trauma.”

For the past 8 months, I have been working with Lee Norton, a therapist in Nashville who specializes in the full spectrum of trauma, from assault-rifle-massacre-survival to the sort of catastrophic early losses like I suffered when Harvey died. I’ve been in-and-out of therapy since I was in the third grade but this feels like the most productive therapeutic work I’ve ever done. Please don’t ask me why it took so long.

I’m not sure what the outcome of this current course is supposed to be. My 67-year-old-self has been spending a lot of time with my 7-year-old self, who, it seems, went into hiding about the time his father died. The kid and I are still deliberating over who liberates who.

And while I’ve been doing that work, I’ve been spending some (but not nearly enough) time rummaging through my father’s writing and the correspondence he and my mother exchanged during World War II.There seems to be a connection.

I know what some of you are thinking: Why doesn’t he just get over it?His father died, the family moved, yada yada. It was 60 years ago.Move along…

I’ve even heard the word “indulgent” to describe these nostalgic disquisitions.

Yes, I am deeply conflicted about the whole proposition.On the one hand, it feels like necessary and unfinished work, despite the half-dozen decades between me and the events I keep returning to.On the other hand, at times the whole exercise seems like an excuse for not moving on to more constructive pursuits.

All of this came up in a session I had with Lee Norton shortly after this last visit to my point of origin. After wondering why am the only one of three siblings that continues to be affected by these long ago events, Lee offered:

One kid tends to get hit more than the others. Regardless of what the catastrophic loss was, the usual defense mechanisms are overwhelmed. It’s a very physiological process. The brain doesn’t have anywhere to put it, so it accumulates and sequesters in the right hemisphere which has no sense of time.

The brain always wants one linear, explicit storyline that it can then put away. Until you look into a catastrophic event and do something …. the brain does not recognize it as finished and when it’s not finished then all these unconscious processes kick in and we recapitulate. We’ll have relationship or job dilemmas; it’ll show up in lots of different ways – financially, self medication (umm…that would be me). The goal is you have to get it finished...

So I am, once again trying to get it finished.

For you, reading these things is optional.For me, apparently, writing them is not.

A 180º panorama of Monmouth Avenue. It was a great neighborhood for kids and bicycles.
No helmets required. 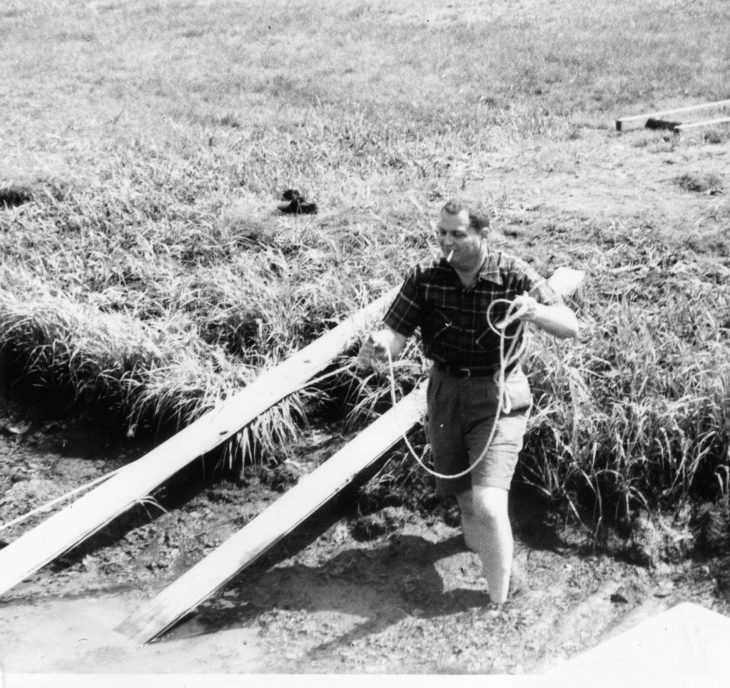 I surmise that anybody who’s been following this revival of my father’s writing has learned by now that Harvey died of cancer in 1958 at the ripe young age of 37. Therein lies the tragedy and the origins of the personal trauma that I’m exploring now (while undergoing a fresh round of new personal trauma right here in 2018. But we’ll get to that later…).

Almost everything I ever knew about his illness (which is to say, nothing), was expressed in a poem I wrote a long time ago about the Little Green Boat our family owned while we still lived near the Shrewsbury River in Rumson, New Jersey.

What I do have in the archives that I’m rummaging through now are three short essays that Harvey wrote about his experiences in the world of mid-1950s medical care. Herewith, then, are those three essays, starting with:

It’s peculiar that when reading the travel and resort section of the Sunday papers that I have never noticed any ads for Rochester, Minnesota as the ideal winter vacation spot. Much is written about Miami, Palm Beach, Bermuda, and the West Indies. But who is singing the praises of this happy little village nestled peacefully in the Zumbro Valley? (named for its discoverer Sam Zumbro, who mistakenly thought he had found the Khyber Pass.) END_OF_DOCUMENT_TOKEN_TO_BE_REPLACED 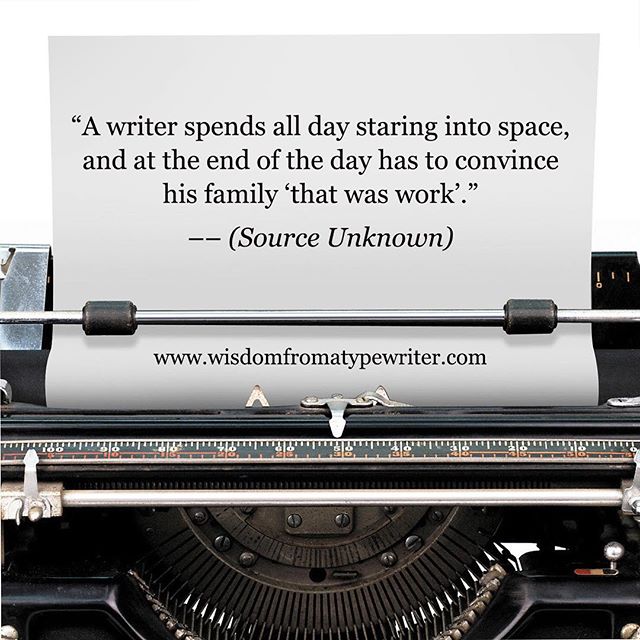 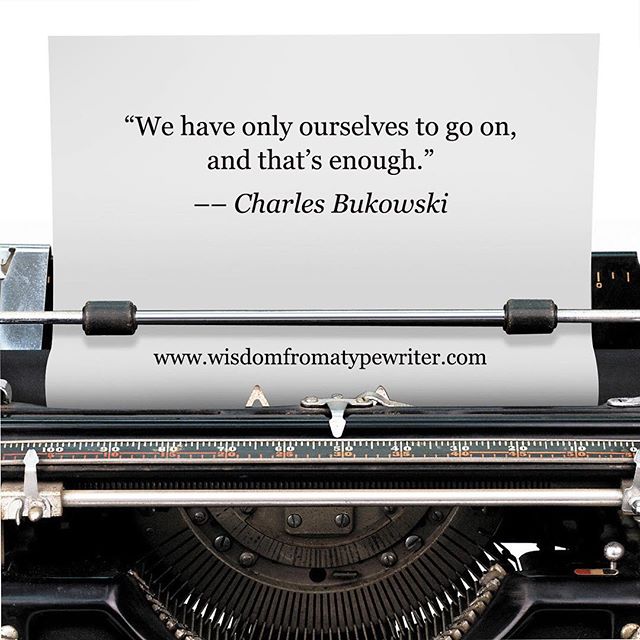 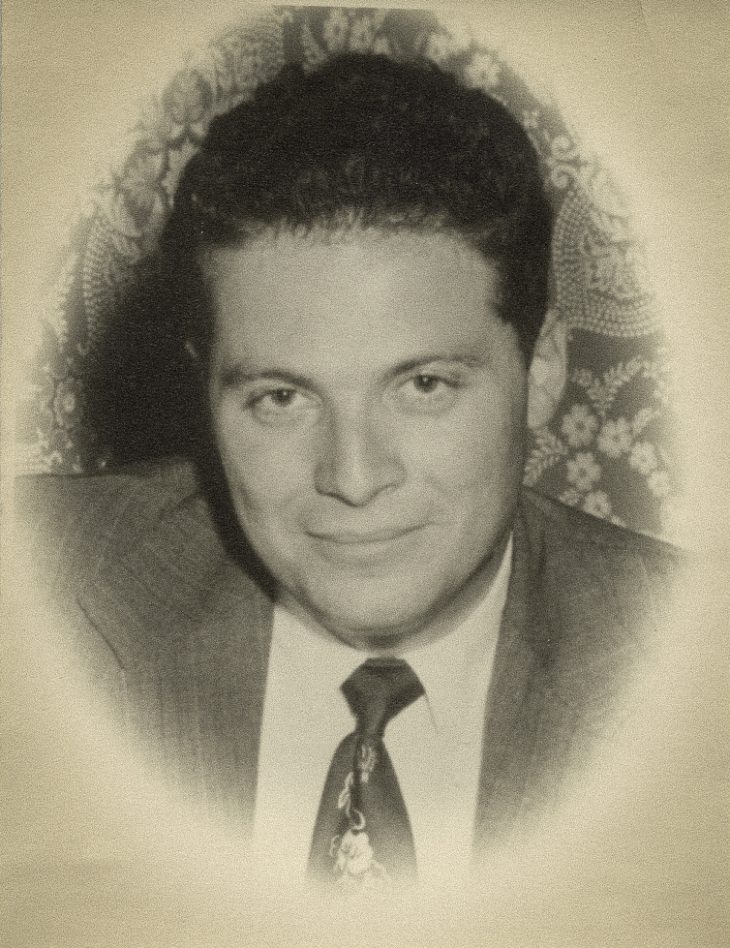 Returning now too the subject of My Father and the things that he wrote during his relatively brief time on Earth:

One of the most “famous” of my father’s works (which is to say, famous within the family) is the letter that he wrote to the Parker Pen Company while a student at the University of Illinois in the fall of 1940.

As you can see I am writing a letter to the company that makes (by its own admission) the finest pens in the world – by using a typewriter.

I do this not because I do not have a pen., No, gentlemen right here in my left hand I have a pen. Said pen is called in one of your ads which I just happened to read, quote, a Jewel of Pendom, unquote. However, if I were to attempt to write this letter with this pen, the pages would be so smudged up with ink that it would be totally impossible for you to read it. But allow me to explain the case a little more fully.

About two years ago (or possibly a few months less) I wandered into a bookstore on our campus – that of the University of Illinois – and purchased a Parker pen. Since this memorable date, I have had nothing but trouble with the amazing instrument.

The trouble, to sum it up briefly, is that this pen leaks – leaks torrentially.

END_OF_DOCUMENT_TOKEN_TO_BE_REPLACED 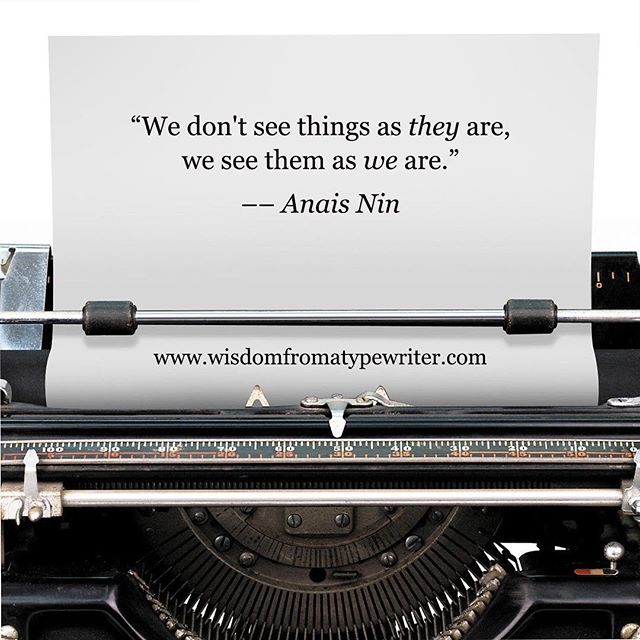 My Name Is Harvey… 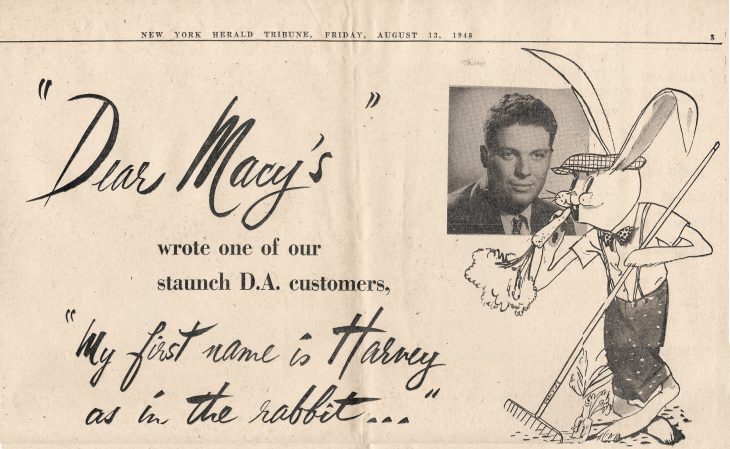 So began a letter that my father, Harvey Schatzkin, wrote to Macy’s in the winter of 1946 – four years before I was born.

He and wife Ellen were living at the time in an “inflated white house” in Milltown, New Jersey – building their lives together on the early fruits of America’s post-war prosperity. For a vehicle, they owned a surplus Army Jeep, and as they assembled their household, they purchased a lot of stuff from Macy’s Department Store in New York City.

Problem was, Macy’s kept delivering their purchases to a factory on the other side of town.

So my father wrote Macy’s a letter.

Letter-writing was one of my father’s talents. For decades now, I have been sitting on a trove of letters, essays and stories that he wrote. All along I have been thinking I might one day do something with them. It seems that day has arrived.

END_OF_DOCUMENT_TOKEN_TO_BE_REPLACED

It’s been a LONG time since I dug into that Epic Memoir I started working on like two years ago… based on the journals I started during my senior year in high school and first year of college – 1969 and ’70.

But this morning I spent a little time re-learning a Phil Ochs song that I first learned… well, just a little over 50 years ago. I know because I wrote down all all the chords and lyrics in a spiral note book. And the date above “Power and Glory” is July 18, 1967. I probably haven’t played the song since 1968, but I played it today.

And I think that inspired me to open the file for “Time Capsule” for the first time in a long while.

I’m still not entirely certain what this project is supposed to be. I vacillate between concepts: Is it a book? The concept seems dated. Could it be some kind of web-based, multi-media, interactive…. something or other? That might actually might be interesting: availing myself more fully to all the stuff that is readily available via YouTube, etc. Or could it a “one man show” in which I read and recite passages from the text and (finally!) get to and perform the songs of the era that I still remember how to play and sing?

But it ain’t gonna be much or anything if I don’t actually work on it.

So today I worked on it. I opened the Scrivener file ad landed on a chapter I’d already written about my first experiences with the demon weed. So I posted that as a new “chapter” called

*PIF and The Delaware Water Gap

And if you’re wondering, here’s a recording of the Phil Ochs song that got me started. It struck me as a useful reminder of what we’re actually trying to save while the institutions around us are crumbling…